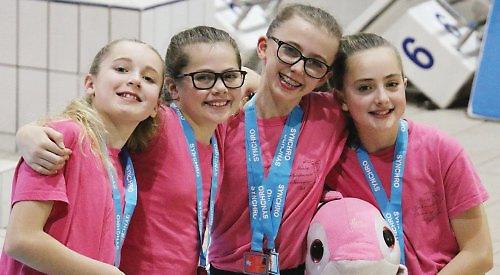 FOUR girls from Henley Synchronised Swimming Club picked up a silver medal at the multi regional competition at the K2 in Crawley last Saturday.

Henley’s U12 squad qualified for this event along with only three other teams from the South of England.

The team of Annie Skaanild, Emma Buckley, Eva Narewska and Zara Warren swam a yoga themed routine which showed off their flexibility. They were controlled, high in the water, sharp with their movements and the patterns were close knit and well formed as they secured the runners-up spot. Buckley also qualified to swim her solo which was to the Pink Panther music. Buckley gained high artistic scores for her interpretation of the music and her flexibility was unparalleled as the swimmer, coached by Mikki Carter, picked up a bronze medal.

The club are now preparing for the National Age Group Competition in two weeks’ time and the Christmas show December 2 .

• ANYONE interested in trying synchronised swimming is invited to join in a trial session on Sunday, December 16. For further details email synchro@hen
leysynchronisedswimming
club.org