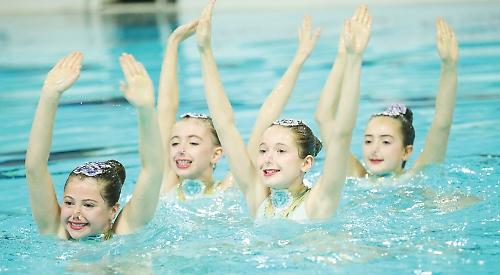 Athletes from the nine to 12-years group exceeded all expectations in the figures competition. Eva Narewska placed ninth, Zara Warren 26th, Emma Buckley 31st and Annie Skaanild 79th. At only 11-years-old this placed them third, seventh, ninth and 16th respectively for their age.

All four athletes swam a yoga-themed routine in the team competition, showing off their flexibility and strength as they moved as one through the water. Their team score was added to their average figure scores to achieve ninth place overall.

Emma Buckley also swam in the solo competition, placing 10th out of the 12 swimmers that qualified. Buckley showed good showmanship swimming to music from the Pink Panther.

Narewska was invited to trials for the England development squad as one of the top 10 athletes in this age group which is coached by Mikki Carter. Poppy Butler and Oliver Warren secured the silver medal for their mixed duet swim in the 13 to 15 age group. With music from Footloose their fun, energetic routine was a crowd pleaser, achieving their highest ever score in this category. Anyone interested in trying synchronised swimming is invited to join in a trial session on Sunday, December 16. For further details email synchro@henley synchronisedswimmingclub.org