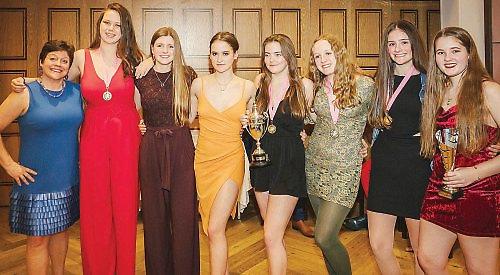 HENLEY Synchronised Swimming Club held their annual awards evening at Leander Club where various trophies were awarded after a brief talk on all the achievements throughout last year that included an invite to trial for the England development squad.

The Unicorn Cup for land training went to Zara Warren while Eva Narewska won the Millie Edwards Cup for outstanding achievement. Other achievements of note saw Skaanild knock 2.5 minutes off her 400m swim as well as passing three grades in the last year. Georgia Hunter also passed three grades over the last 12 months while Emma Buckley, who as the first swimmer from the club to swim a solo at national level, joined Narweska to pass their grade three silver.

Buckley, Narweska and Warren are all now in the top 10 in the country in their respective age group.

The final award of the evening saw Millie Jones pick up the Mermaid Cup. Jones, who has been with the club since she was 10, qualified to enter NAGS (national age group) from the age of 14 and became the first person in the club to get grade five since 1981.