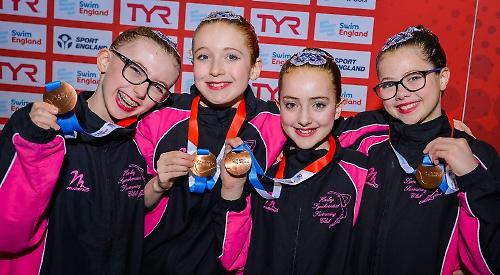 The age 12 and under squad, comprising Annie Skaanild, Emma Buckley, Eva Narewska and Zara Warren, performed in the competition held at the Manchester Aquatics Centre on the weekend of March 2 and 3.

The club entered all categories, the compulsory figures, and produced three solos, one duet and a free combination team display.

In the figures event, Eva was placed fourth, Zara fifth, Annie 22nd and Emma 24th in the country. Emma and Eva then swam a duet to Electric Pow Wow Drum by A Tribe Called Red, which is dubstep-influenced dance music with elements of First Nations music, particularly vocal chanting and drumming.

They tried to show the theme through quirky movements and different facial expressions and have been working on angles, pool coverage and swimming closely together.

The swimmers have added strength training at the gym and more speed swimming to keep up the tempo throughout the routine and the duet was awarded the bronze medal. In the solo competition, Zara, Eva and Emma all swam. Zara’s solo was to Winter by Vivaldi and was able to demonstrate a range of movements such as her “barracuda” to vertical hold and spin.

Eva performed to Once upon a December from Anastasia where she was able to show off her speciality of barracuda thrusts and splits. Emma swam to Pink Panther, which was the second time she has done so at a national championship, having worked on being higher and more precise in all movements while keeping a fun, energetic performance.

All four athletes then swam their yoga routine in the free team competition, for which they won bronze.

Coach Karen Bennett said: “These are unbelievable results for our small club. In 2013, our first year of competing, saw us place last in all three teams at the recreational championships. Six years later we are the third best 12 and under team in the country and two of our athletes ranked in the top five in the country.”

The club is looking for sponsorship and will be holding a trial session for six to seven year olds on March 31. For more information, email admin@henley
synchronisedswimmingclub.org