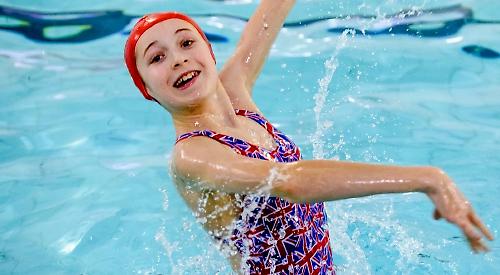 A 12-YEAR-OLD swimmer from Henley Synchronised Swimming Club has been selected on to the England youth squad after qualifying to attend a selection event in Bristol.

Eva Narewska was one of 50 eligible swimmers that had to perform a series of technical moves known as figures, together with tests on land and in the pool, with national and international team coaches assessing their flexibility, stamina, control, extension, speed, stability and uniform motion.

Several days after the event Eva learned she was one of 21 athletes who had been selected for the squad, which provides extra training and coaching for the most talented athletes in the country.

Eva, who lives in Maidenhead and attends Newlands Girls’ School in Maidenhead said: “I was at school when my mum got the email so I only found out when she picked me up from school swim squad training a few hours later, to take me to synchro training. I was so happy when she showed me the email.”

Eva’s journey into synchronised swimming started when she was nine years old, but she had learned to swim much earlier, as a baby with Waterbabies where her mother took her from three months old.

Eva started gymnastics and dance classes and joined Maidenhead Marlins Swimming Club but by the time she was eight she found it frustrating just swimming lengths of the pool.

It was then that Eva’s mum showed her some synchronised swimming on the television that she realised she could combine her love of swimming with gymnastics and dance training and music and all things creative.

Eva went for a trial with Henley Synchronised Swimming Club, based at the Gillots Leisure Centre in Henley, in April 2016, aged nine, and loved it and progressed really quickly, taking and passing her grade one figures test a couple of months later.

Eva joined the club’s team for 12 years and under and then competed at her first national age groups synchronised swimming championships (NAGS) in November that year and continued to progress, entering several competitions and winning several medals.

Eva passed all the grades for her age group and qualifying to swim with the team at NAGS again in 2017 and 2018 with the 12 and under team and then with the team and also in the duet and solo events in 2019.

Eva said: “I am lucky to live fairly close to where the GB synchro squads train and I have been to watch them showcase their GB and Olympic routines several times.

“Through an auction prize at one of the displays, I won an Experience Day, training with the GB squads which I attended in February 2018. There I trained alongside my idols Kate Shortman and Izzy Thorpe and learned about exactly what I needed to do to get into the squad and to get to be as good as they are.”

Eva’s results at the 2017 NAGS meant she was selected for the Reading Beacon Squad, a regional squad which is the first rung of the England Talent Development ladder and she attended several additional training sessions, gaining experience with athletes from other clubs in the region during 2018.

At NAGS in November 2018, Eva placed in the top 10 for her age group in the figures competition and later that day her coaches handed her a letter from the England Synchro Manager, inviting her to a trial for the England Development squad — now called England Youth Squad.

Eva added: “I only had a week to learn the routine and prepare for the trial testing! My coaches were amazing and it was all hands on deck. I did my best but I wasn’t invited to join the squad that time. I gained a great deal of experience though and it inspired me to work really hard with the aim of getting to the trials the following year.”

Eva was again selected for the Reading Beacon Squad for 2019. In June she entered the Beacon Games and won the bronze medal and was also selected onto the South East Regional Squad, attending extra training weekends and camps over the last few months.

Her competition results meant she could apply for and was awarded a GLL training award giving her a free corporate membership use of the gym, pool and studio facilities at Henley Leisure Centre.

From January this year Eva has trained five days a week with coach Mikki Carter, working on figures, flexibility and stamina training as well as sessions in the gym, lane swimming and team sessions. Eva has also continued training when possible with Core Gymnastics club based in Maidenhead and joined Henley Swimming Club to improve her stroke technique.

All the hard work paid off as at this year’s NAGS she finished fourth in her age group for figures and won bronze with her team and for duet and placed fifth in the solo. The criteria for the trial entry was changed for 2019 so she also had to pass an internal club testing to qualify for the trial in November.

Eva’s selection for the England Youth Squad means she will attend a week of intense training with the squad during each school holiday as well as over several weekends during 2020, as well as doing at least 20 hours of club training.

Eva added: “I am very excited about being part of the squad. It is a completely different level of training to normal club sessions. I cannot really believe I have reached this level but it is wonderful to be part of it after all the hard work I and my coaches have put in.

“Not only is this a great achievement for me personally, but I feel really proud to be the first swimmer from Henley Synchro Club to have reached this level in the sport. They are a small club and mainly have recreational swimmers but with the help and dedication of my great coaches — Mikki Carter and Karen Bennett — together with the support of my team-mates, family and school, I am aiming high.

“My next goal is to be part of the team at an international competition, hopefully next summer. My ultimate goal would be to be part of the GB team — or duet or solo — and compete at an Olympic Games in the future.”