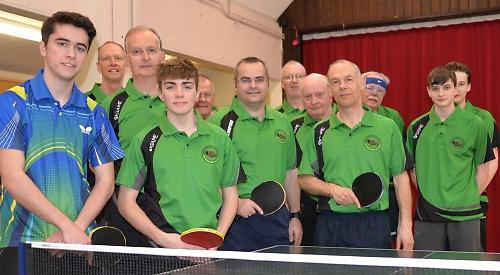 The club, which plays its home matches at Peppard War Memorial Hall, had two senior sides when it began in 1967 but now has eight.

All the members have all been given a commemorative shirt to mark the club’s achievement.

They include 84-year-old Derek Maltby, from Sonning Common, who joined the club a year after it was founded and still plays most weeks.

His son Nigel, who is club secretary, said: “We’ve grown into one of the biggest clubs in the league by having teams across the divisions. This means no matter how good or bad someone is, they can play.”

The club played their first season in the Reading and District League and were then known as Chiltern Edge as they played their home matches in the main hall at the secondary school in Reades Lane, Sonning Common. They moved to the memorial hall in 1970.

Mr Maltby Jnr said: “Lighting was poor at Chiltern Edge and with the ever-present threat of the school caretaker threatening to kick us out of the building spot on 10pm, the club opted to move.” The club changed their name after a season at their new home.

Their first promotion to the top division was achieved in 1978/79 and nine years later they won the title after a play-off.

Mr Maltby, from Caversham, said: “It was probably the club’s biggest season. They were all top players at that time, not just locally but in the country.

“Once we were promoted to the top division a few good players joined and it has snowballed. Brian Halliday recruited the others and those were some of the best defensive players in the country.”

The club’s membership peaked in 1992/93 with nine teams in the league.

At the end of last season Mr Maltby Snr was awarded the Harold Larcombe Sportsmanship Award by the Reading and District Table Tennis Association in recognition of his many years of playing.

The club would welcome new players for the 2017/18 season with practice sessions starting on June 1 and the season itself in September. Call Mr Maltby on 0118 946 3191.