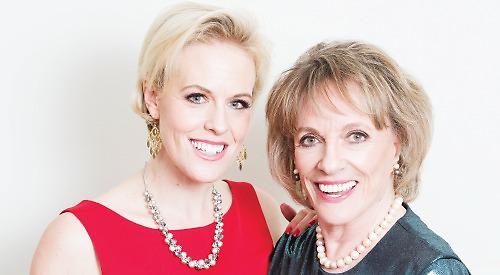 FROM dogs saying “sausages” to the most intriguingly shaped vegetables — in the course of her 50-year career in broadcasting, Dame Esther Rantzen has pretty much seen and done it all.

The latter ranged from a road safety campaign highlighting the importance of wearing seat belts to the founding of ChildLine.

Other landmark That’s Life campaigns included raising awareness of the need for child organ transplants and helping bring about safer surfaces in playgrounds.

More recently, Esther has followed up on her experience with ChildLine by founding The Silver Line to help older people.

With so many milestones to celebrate, Esther has decided to hit the road in 2018 with her first ever live UK tour.

Accompanied by her daughter Rebecca, who has followed in her footsteps by forging a career in broadcasting and journalism, this will bring her to the Kenton Theatre on Saturday, June 2.

With Rebecca grilling her mother live on stage, expect to hear about the triumphs, the low points and the embarrassments Dame Esther has encountered during her career. After all, that’s life!

By way of a taster, Rebecca agreed to ask her mother a few preliminary questions ahead of the tour getting under way. Read on...

So Esther, why a theatre tour?

It is a bit of a milestone, one’s 50th year in broadcasting. It’s a time to look back and relive the fun and the embarrassing and the slightly disgusting.

Well, lying in a coffin underground while being showered with creepy crawlies to entertain Ant and Dec’s TV audience. [Esther holds the record for being in a coffin with cockroaches on I’m a Celebrity... Get Me Out of Here!] Also, I love working in theatres. That’s Life! was always performed in front of a live studio audience and so was my Dick Whittington pantomime in Bognor, which I still think was the height of my performance career.

Own up, Esther, what’s your most embarrassing memory?

Taking a gun into Clarence House, the home of Prince Charles.

Possibly not a good idea...

That’s what the security officer thought. I had forgotten it was in my handbag — my grandson Benji put it there, heaven knows where he had found it. It was a relic of my late husband’s feud with the grey squirrels in our garden and I think it was only a BB gun but it looked like something out of James Bond.

People have asked me if you’re scared that I’m going to ask you probing questions on tour because I know where your skeletons are hidden and have no fear of asking about them. Are you scared?

I’ve just realised you’ve never told me who you vote for politically.

That’s true. Don’t ask me who I vote for, it’s my secret. And while we’re talking about no-go areas, please don’t mention my teeth — because for years that’s all people talked to me about and I used to be constantly labelled Toothy Esther Rantzen. Don’t call me a veteran broadcaster, because that sounds like an old banger. And please don’t let anyone call me an institution — that makes me sound like a prison or a psychiatric hospital. Labels, I don’t like any labels. I remember when a colleague of mine, Heather Mills, was always known as the tireless charity campaigner...

I’d just say she is the most interesting person I ever worked with. She was incredibly complicated. A fascinating woman.

Ah, so you’re willing to name, shame, blame and possibly defame in our show?

Defamation is very expensive, as I found to my cost on That’s Life! But I have been lucky enough to meet some very famous people, including Heather, and Sir Tom Jones, and Margaret Thatcher, and Anton du Beke — it’s always fascinating to discover the truth, what actually goes on behind the famous faces.

That being so, what’s the most infuriating question anyone could ask you?

In the days when I used to produce and present the Sunday night edition of That’s Life! because it was a consumer show it used to take a huge amount of work to investigate viewers’ stories, and track down the villains, so it was highly irritating when people would always ask me “What do you do for the rest of the week?”

As you may remember from your childhood, Rebecca, it was full on. The team and I worked 24/7. There were 15,000 letters a week that had to be read, the best stories had to be thoroughly researched, talented pets had to be filmed, vox pops done, scripts to be written, let alone finding something halfway decent to wear each week.

At one stage I used to wear Petula Clark’s cast-offs, which were still in the BBC’s wardrobe. No wonder Victoria Wood said of me “I don’t know why they go on about her teeth, have you seen her frocks?”

My final question, Mother. Why are we forcing ourselves to confront these moments?

Because while we know that they may have been tough at the time — I remember that police van vividly — it will be deliciously entertaining for you to make me relive them and give the audience a glimpse of the reality behind the glitz — and if the memories make us both blush it’s because they are true.

• Esther Rantzen and Rebecca Wilcox visit the Kenton Theatre on Saturday, June 2. The show starts at 8pm and has a running time of two hours without an interval. Tickets are £23.50. To book, call the box office on (01491) 575698 or visit www.kentontheatre.co.uk. For a full list of tour dates and more, go to www.dameestherrantzen.com

I don’t think you actually answered that question [about infuriating questions to be asked]. And on our tour you will have an audience Q&A section — will you answer their questions, and does the thought of that make you nervous?

No, I think it’s exhilarating — I love the unprepared and unexpected danger of that. And given your refreshing spikiness I know I won’t be allowed to get away with anything that sounds like a bland excuse.

Is there anything you’ll want to ask me?

Yes, what is your happiest memory of your childhood and your saddest memory?

Obviously the saddest memory is when Dad [the award-winning documentary maker and TV producer Desmond Wilcox] died in 2000. Aside from that and the other deaths of loved ones, it would be when I was about 14 years old and my boyfriend of about five days left me and I told you and you just giggled. My happiest memory is hard to choose as my whole childhood was very happy. Possibly Dad teaching me to dive in a holiday swimming pool and you taking me to the theatre to see Les Misérables, where I wept for about two hours straight.

And I had to walk out of the theatre clutching the hand of a weeping child, having just set up ChildLine — so I expected at any moment for someone to call the police!

And arrest you for the second time in your life?

Yes. I do have a criminal record. [In 1981 Rantzen was arrested for obstruction while filming vox pop interviews with the general public for That’s Life! in London’s North End Road. The entire incident was filmed and shown during the next episode, to the delight of the watching millions at home.]

Seriously, is there anything you’d rather I didn’t ask you about? Like whether you have forgiven me for being a moody teenager?

Well, you’ve hardly changed at all!