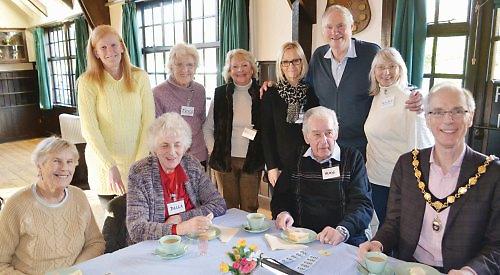 THE Henley Visually Impaired Group is seeking a new chairman to prevent it from folding.

Current chairman Mike Pooley has been running activities for residents with sight problems for the last 16 years.

But he is now 83 and has had to stop as he feels the work is too much for him.

Mr Pooley, who lives with his wife Jackie in Broadplat, used to arrrange the gatherings at Greys village hall with the help of volunteer drivers.

He said: “If nobody comes forward to replace me, then these meetings will have to stop. I found myself organising the event, moving the furniture and doing everything else and it has just become too much work for me in my eighties.

“I am a fundraiser for the Regatta for the Disabled, having done three years as chairman. It was only when I got to 80 that I realised I was getting older and it has caught up with me.

“The biggest job is phoning around all our members and getting the volunteer drivers sorted. I had someone to do that until recently but it is quite time consuming.

“We find these days that people will help out, perhaps on a day or two, but will not commit to something long-term, which is what this would need, but it is only once a month.”

When Mr Pooley first started helping out as a volunteer, there was a team of five people responsible for the group’s activities. Visually-impaired residents have met for more than 20 years, thanks to the group. Residents are collected and taken to the village hall for a two-hour session before being taken home again.

These meetings often include some form of entertainment as well as tea, cake and activities. The group is self-funded and the Mayor of Henley is invited every year to meet the members.

The last meeting was held in September when members were told that there wouldn’t be another one until a volunteer was found.

Mr Pooley said that although the number of members had dropped in recent years, the service was still vital to the community. He said: “When I first started we had about 30 members but now we are down to 12, which includes a lady who is over 100.

“For many people this is one of their only opportunities to get out and meet other people. They love the chance to have a chat.

“We have taken them down to the River & Rowing Museum and every year we have a Christmas party.

“The members like to meet and talk with other people, so it is very important that it continues.

“I have enjoyed the chance to help people but I just can’t do it any more, I’m too old.”

Town councillor Kellie Hinton, who attended one of the group’s meetings when she was mayor, said: “It is incredibly important to have groups like this.

“They provide great support not only for the people with sight problems but also for their families.”