Test Match Special star was hit for six — by a bus 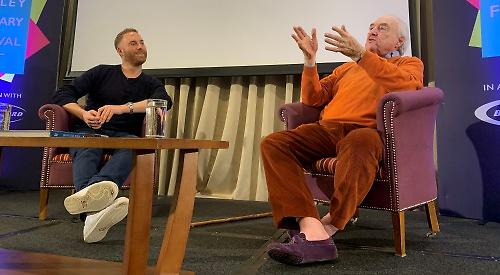 TANGENTS can be frustrating, but when Henry Blofeld starts talking, you hang on his every word.

During his visit to Phyllis Court on Sunday afternoon, barely a minute was spent discussing his latest book My A-Z of Cricket — but nobody complained.

The legendary commentator had been scheduled to appear at this year’s Henley Literary Festival on October 4, but this was rearranged after the publication of his book was delayed.

Host Matthew Stadlen asked him about the time he had a near-death experience and for every conversation starter like this one, Blowers would throw it back and say he had a more interesting story he wanted to tell.

Most people would regard being hit by a bus as a teenager — and falling unconscious for 28 days — as a worthy anecdote, but Blowers simply says “My dear old thing” and swerves the conversation, as he says he wishes the bus had done him all those years ago.

Some 20 minutes later, the original question was forgotten, but a packed audience in the Finlay Suite was struggling to recover from fits of laughter.

Blowers has a unique ability to recall moments from his life and uses immensely descriptive language, which makes you feel as if you were on his shoulder reliving it.

Funny stories included the time Blowers — regarded as cricket royalty — met actual royalty and the embarrassing moment he was caught naked in a hotel lift in Nottingham.

The palace had heard that the Test Match Special team was often presented with cakes by devoted fans and so Blowers and his
co-commentators had the chance to meet the Queen at Lord’s.

He unsuccessfully tried to bring a smile to her face by saying the listeners preferred it when there was a rain delay, although this was nothing compared to Jonathan Agnew asking Her Majesty if she had made the cake herself.

The redness in Blowers’s cheeks at failing to make the Queen laugh did not come close to how he felt when hotel guests hurled bread rolls at him as he stood with only a piece of paper to cover himself. It is worth explaining that was an unfortunate accident — he stumbled out of his room in the middle of the night, attempting to find the bathroom, and somehow ended up in the restaurant in his search for the night porter when he got locked out.

He retired from BBC Test Match Special in 2017 after 45 years on the airwaves, but life has not exactly come to a grinding halt since. He has toured the country, both solo and with former spin bowler Graeme Swann, as well as releasing two books.

Despite being educated at Eton College and Cambridge University, a younger Blowers was uninspired until he was offered the chance to report for The Guardian in 1963 during England’s tour of India.

He had played first-class cricket himself at university alongside England all-rounder Ted Dexter and was made captain of Eton during his final year of study.

Blofeld has a huge talent for imitation and he humoured the audience with his memories of commentating alongside the likes of John Arlett.

There are few people better placed to describe the intricacies of cricket and Blowers’ encyclopedia spans from the pioneering Dr WG Grace, to the heroics of Ben Stokes during the summer of 2019.

His latest book includes anecdotes from his 50 years in print and broadcast journalism and you don’t have to worry about being heavily versed in the game, as it includes explanations on sometimes tricky terminology.