Talk had the pets factor 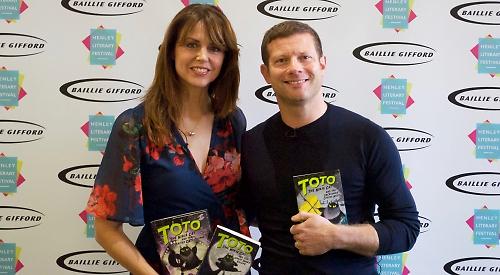 IT could have been chaos as Phyllis Court’s Finlay Suite filled with children and their parents. But in the event it was far from chaotic.

Sunday’s Henley Literary Festival event was fun — dare I say even relaxing — for adults and children alike, and especially for cat lovers.

Dermot O’Leary, interviewed by Beverley Turner, was there to talk about his series of children’s books based on his own, much-loved, pet, Toto the Cat.

Perhaps best known for his work on television and radio, O’Leary has been an author for four years, an addition to his career inspired by his cats.

He regaled Sunday’s audience as he described how he acquired Toto and his other cat, Silver, from Italy. His wife even helped to deliver them.

It was only when they brought the kittens back to their London home that they realised Toto was almost totally blind. Owing to his blindness, O’Leary explained that he had extreme reflexes and as a result they nicknamed him “Little Ninja”. Silver, his sister, was affectionately named his “guide cat”.

As O’Leary talked about his pets and how they influenced the stories he went on to write, photographs appeared on a screen behind him.

A huge “ahhh” resounded from the audience as a fluffy Toto perched two paws on the step of a chair, or lounged on the stairs, big eyes shining. It was easy to see how O’Leary was so smitten and why he was so inspired.

Talking about his childhood and the Irish tradition of telling stories, it seemed he was destined to become a writer — his cats just gave him a push in the right direction.

He described with affection his Saturday morning library visits and encouragingly a show of hands from all the children in the audience showed that libraries — in Henley at least — are still treasured, despite the constant challenge to keep children away from screens in today’s technology-obsessed society.

O’Leary, whose books are aimed at boys or girls, evidenced by the demographic of the audience, said as a child he was influenced by Roald Dahl, in particular Fantastic Mr Fox, and the picture books of Raymond Briggs, The Snowman and Father Christmas.

He talked with excitement about the illustrations created by Nick East for his book, describing them as “vistas”. Smiling, he said that East really captured the essence of his characters and indeed the setting. In writing not only to entertain, he said he hoped to write a love letter to London, his home.

The first book, Toto the Ninja Cat and the Great Snake Escape, is set in London with a plot involving snakes escaping from London Zoo. It is full of creatively named characters and places, including Larry the Downing Street Cat, a rat called Catface who wants to live life as a cat, and a milk bar called The Sour Saucer under Blackfriars Bridge.

His new book, the third one in the series, Toto the Ninja Cat and the Superstar Catastrophe, is similarly imaginative, as Toto and his feline friends go to their very own music festival, Catstonbury, headlined by Jonny and the Shorthairs.

O’Leary admitted that writing allows him a change from live TV and radio, it lets him be creative and also allows for time alone. And while it is more insular than the other jobs he has, he enjoys them all in their own way.

The event was fun and halfway through there was a tutorial video from Nick East describing how to draw Toto. The children, who were all handed paper and pencils, enthusiastically drew along.

There were some impressive outcomes and definitely some budding illustrators. O’Leary, shaking his head, said he was not one of them and that his skills for art “matured when I was five”.

The children in the audience were excited to ask questions and O’Leary answered each with interest and humour; he had a great rapport with the young audience.

He gave out lots of tips along the way for aspiring writers and the children nodded along, lapping up the information.

O’Leary seemed reluctant to finish the event and when time was up, there were still lots of enthusiastic hands raised in the air.

What a delight it was to see so many children so excited by books. What a triumph for O’Leary. It truly was a “purrfectly pawsome” event for everyone and a great tribute to all our feline friends.