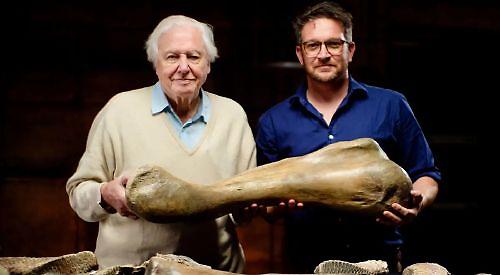 BEN GARROD has been curious about the evolution of all organisms — living and extinct — since he was a boy.

His interactive, educational show, So You Think You Know About Dinosaurs?, promises to inspire a new generation of children to become interested in science and life on earth — and
set parents right about a few
misconceptions.

Dr Garrod, an evolutionary biologist and primatologist, grew up in Norfolk, where the beaches provided ample opportunity for fossil-hunting, in the Eighties and Nineties.

He found ammonites and belemnites from 100 million years ago which he says look like “little fossilised squid or bullets”.

This prompted the young Ben to take them into school and ask his teachers about what had happened to the creatures.

“I can vividly remember people not having the answers that satisfied me and I must have been the most annoying kid in the world,” he says. “I can remember upsetting my poor teachers with it.

“We didn’t have the resources we have today whereas now we can Google them.

“[Twitter means that] within five minutes, you’ve got 30 different people all chipping in answers and diagnostic techniques.”

Technology to help investigation is also improving all the time, as was shown by the discovery of a perfectly preserved dinosaur embryo in China in December.

Dr Garrod says: “We can look inside that eggshell without cracking it open. We’ve seen a few embryos like that before but, as far as I know, nothing quite with that level of preservation.

“Discoveries are coming in thick and fast. We’re describing a new species of dinosaur scientifically about once a week, on average, at the moment.”

But adults accompanying their children to the show should be prepared to be surprised.

“It’s a tongue out to the assumptions that people make,” he says. “Close your eyes and imagine a
T-Rex in your garden right now. Most adults will say a big, green scaly thing that roars with razor-sharp teeth. Well, that’s not true at all.”

Apparently, T-Rex had feathers and was maybe striped or brightly coloured with its head low to the ground.

“Almost everything we currently visualise about T-Rex in the public eye is completely wrong,” says Dr Garrod. “And that’s the same with nearly all these big dinosaurs, triceratops, stegosaurus and diplodocus.

“Some of these were bright ginger, some had an iridescent sort of black, oily fleck to them. There were stripy ones... ones with bright red and white faces.”

It is these different appearances that make dinosaurs more like humans than we might think. Dr Garrod explains: “They were defending territories, they were attracting a mate, they were blending in to avoid being eaten.

“Suddenly, they’re just like the animals alive today and I think it makes them more interesting.”

Another misconception is that dinosaurs could roar. They couldn’t.

While mammals have a larynx and birds have a syrinx, dinosaurs had something between the two.

Scientists have managed to find some dinosaur voice boxes and run computer simulations. So, what do they sound like?

“I’m not going to give it away but they sounded very, very different,” says Dr Garrod.

He is now a professor of evolutionary biology and science engagement at the University of East Anglia and hopes his stage show will help children realise that science isn’t the daunting subject they perhaps think it is but part of their everyday lives.

“The fact you slept overnight is science, the fact your dog is wagging his tail and looking at you and you’re making your coffee... you could name 100 million things — that is science,” says Dr Garrod.

“This is a fun show that I love doing with kids. It gives them a gateway into science. I want some of them going away thinking, ‘I want to be a scientist’.”