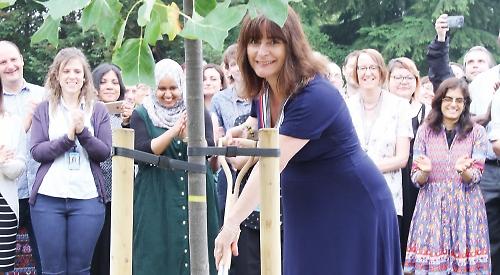 STAFF at Johnson Matthey have celebrated the company’s 200th anniversary.

A series of events was held at the firm’s technology centre in Blounts Court Road, Sonning Common, where 275 people are employed.

These included a visit by 130 schoolchildren, aged nine to 12, to see a science show run by the Royal and carry out their own science experiments.

Members of the community were also invited to see the work done on site. There was also a staff party to celebrate the diversity of the people who work at the centre.

Dr Liz Rowsell, director of the centre, planted a tulip tree in the grounds of Blounts Court to replace a previous specimen that was almost 200 years old but had to be removed.

Trees were also planted at Johnson Matthey bases around the world.

The company opened its base in Sonning Common in 1976 when the catalytic converter began to be sold commercially.

Robert MacLeod, chief executive of the company, said: “This is a very special year for all of us at Johnson Matthey as we celebrate our 200th anniversary and the events were about celebrating the contribution of employees past and present and looking to the future as we build our third century.

“Much of the important work that we do is not visible to the naked eye but the impact of our science is global and profound.

“This year we renew our mission to make the world a cleaner and healthier place for everyone.”