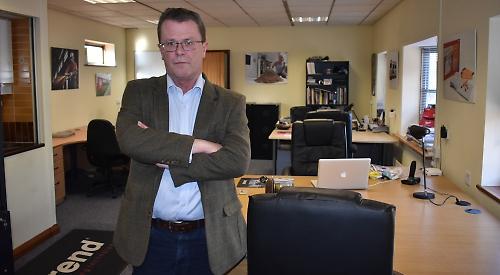 A MARKETING company is threatening to quit Henley over inadequate broadband speeds.

Directors James Munn and Matt Greenwood say the problem is so bad that they can’t expand the business and that they receive faster internet access at home.

The pair run MMS Marketing Services in Queen Street, which was founded in 2005 and moved to Henley in 2014.

Three staff currently work from the premises and the directors want to add two more but are reluctant to do so without a sufficient broadband service.

The current provider is Utility Warehouse but when the firm approached broadband companies about installing a fibre-optic cable it was told the nearest cabinet was full.

The directors also explored having a direct broadband line connected to the premises but were quoted a cost of more than £23,000 for five years, which they say is “prohibitive” for a business of their size.

Mr Munn, who lives in Caversham, said: “With the growth of the business, our plan was to expand our design resource.

“This meant bringing people into the Henley office to produce documents where they are downloading and uploading enormous files all the time. As we were looking to expand the operation in Henley, we had to look at the internet capability. The capacity we have at the moment is derisory.”

Mr Greenwood, who lives in Byfleet, Surrey, added: “We want to base a designer full-time in here. We’ve got a new employee starting at Christmas and we can’t put them where we want them because they couldn’t do their job.”

The directors say that if they cannot find a solution they will have to consider moving their head office out of Henley. The business already has subsidiary offices in Marlow and Poznan in Poland.

Mr Munn said one of the company’s clients, who owns the Ferryboat Inn in Whitchurch, checked the broadband service there and found it had an upload speed of 19.6 Mbps and download speed of more than 60 MBps.

He said: “A little pub in Whitchurch has 20 times the uploading capacity we have here.”

Mr Greenwood said: “We have only started looking into this in the last month or so but pretty quickly came to a brick wall.

“We wanted to move on to a fibre connection, which we always thought was available to us, but we were told the cabinet was full. We rang around providers and they kept telling me it was not available.

“Finally, we spoke to Openreach about a direct line into the premises but it was £390 per month for a minimum five-year deal. That’s prohibitive for a company of our size.

“We want the fibre connection that other people have. It should be easy — this is 2018. My broadband at home is infinitely faster than here.

“Are we unlucky? Does this happen to be us in Queen Street or is it a Henley-wide situation? Is it an infrastructure issue requiring millions of pounds or a modest piece of kit?

“We love it here but if we can’t provide our customers with services from Henley we will have to look at alternative arrangements. If that means we have to move elsewhere then so be it.”

Mr Munn said: “We can’t expand our business in Henley with what we’ve got at the moment. We haven’t actively started looking and we would consider staying in Henley but we are not beholden to it. Being here works for our clients but so would Reading, Maidenhead or Marlow.

“The fallout from that would be it’s another business leaving Henley, loss of rent to the landlord and presenting him with problems — how can he rent out this office with such derisory broadband?

“How can this part of Henley attract businesses with such poor broadband coverage?

“I’ve considered speaking to the MP and the town council who can’t want to see another business leave Henley.”

A spokeswoman for Openreach (formerly BT Openreach) said: “The Openreach cabinet that serves Queen Street is enabled for fibre but it is proving really popular and we’re sorry this particular business has struggled to place an order.

“Work has started to increase its capacity, which will resolve any future issues, but in the immediate future it’s worth them checking regularly with their service provider as the situation can change daily.

“We understand that everyone needs great broadband. To find out if an area is enabled for fibre, we recommend using our fibre checker.”