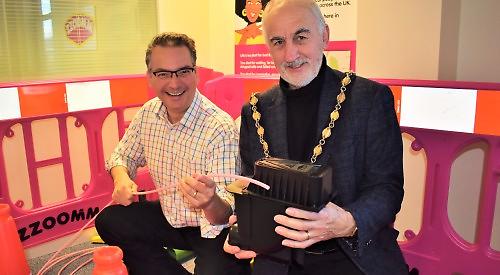 NINE hundred of Henley’s 6,800 households are now equipped to receive a new high-speed internet service that will be 200 times faster than the current average.

Contractors for Zzoomm, whose offices are at the Hub in Station Road, have laid fibre-optic cables beneath pavements at the western edge of the town and are still on track to cover all of Henley by the end of next year.

Households which sign up for the service will then be able to have a high-speed line connected straight to the property.

Customers will be able to subscribe as soon as a main line has been installed in their street. Speeds will range from 100Mbps to 10,000Mbps compared with the national average of about 47Mbps.

So far the company has covered Luker Avenue, Crisp Road and surrounding streets, Hop Gardens, streets off Deanfield Avenue, Deanfield Road and Valley Road, a section of Greys Road between Deanfield Avenue and King James Way and some parts of the Wootton Manor estate.

Work will progress more slowly once it reaches the town centre because of the higher density of buildings and the need to trace landlords to obtain permission to attach equipment to buildings.

Five gangs of contractors have been working up to seven days a week to roll it out. They have now stopped work for Christmas and will resume on January 6.

Chief executive Matthew Hare briefed Henley Mayor Ken Arlett on progress last week and the company will publish its prices at a launch in a few weeks’ time.

Mr Hare said: “The launch is the next big thing and we’re just finishing testing to make sure everything works brilliantly from the start.

“People will be able to get it as soon as it’s live and initial interest has been really good.

“We’ve got about 400 people on our mailing list and we’re getting a lot of emails asking for more information. We’ve even had people visiting in person.

“Broadband isn’t awful in Henley but a lot of people have said it’s not as good as they would like.

“A range of people have been in touch, from technology enthusiasts to families who see a big drop in speed when the kids are all using their devices.

“There’s clearly a need for something faster and there will be a lot more interest when we publish our prices.”

Once the network is built, the company hopes to stay at its Henley offices and service yard in Ewelme while expanding to other market towns that don’t have a similar service.

It sponsored this year’s Henley Christmas festival and hopes to support other events.

Mr Hare, who also runs offices in Oxford, said: “We’ve got about 240 towns on our target list as there will be a lot more demand for this as technology improves.

“The fact that you can just drop in, as some people have done, shows how close we are to the community.

“We’re not another inaccessible corporate face and we’ve had good feedback about the work we’ve done so far.”

Councillor Arlett said: “There were always concerns about the impact of the installation work but I go round the town all the time and think they’ve done a brilliant job.

“It’s clean and tidy and they move quickly so people don’t have their pavement dug up for weeks.”

Although most of South Oxfordshire’s existing network uses fibre, many individual properties are hooked up by slower copper cables.

Mr Hare was previously chief executive of Gigaclear, which is installing superfast broadband in the Wargrave area and has shown an interest in introducing it to Watlington.