Debbie's back on form 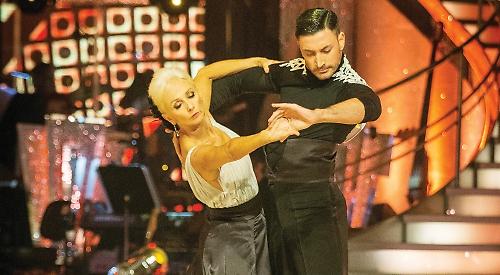 DEBBIE MCGEE bounced back with her latest performance on Strictly Come Dancing.

The radio presenter, who lives in Wargrave, was joint top of the leader board after wowing the judges with an Argentinean tango with her professional partner Giovanni Pernice on Saturday’s live show.

This was in stark contrast to the previous week when the couple had to take part in a dance-off to decide who should be elimimated from the competition before the judges decided to save them.

McGee complained about suffering aches and pains during training but Pernice took her to watch former Strictly professional Vincent Simone, the Argentinean tango world champion, perform and take some advice.

This paid off as the pair were awarded 38 points out of a possible 40 by the judges to share first place with actor Joe McFadden and his dance partner Katya Jones.

Pernice, who was sweating from effort at the end of the dance, swung his partner in the air as they finished the performance.

Judge Bruno Tonioli described McGee as “the queen of Buenos Aires”, while the notoriously picky Craig Revel Horwood exclaimed: “I wish I could dance like you.”

He said his “one small note” was that her legs needed to be slightly looser.

Head judge Shirley Ballas said: “I pride myself on my balance but I’ve never seen balance like that.”

Fellow judge Darcey Bussell criticised McGee’s upper body shape during the lifts but added: “It was outstanding. You are extraordinary.”

McGee, 59, told hosts Tess Daly and Claudia Winkleman that she was “really sad” to have been in the dance-off the previous week and struggled in training.

She said: “I pulled a muscle three weeks ago and with all the lifts it really played up. We had a few days where we thought we might have to cut a few of them.”

The tango was one of two dances on the night for the couple, who also had to take part in a “Pasodoblothon”, a mass Pasodoble with the other competing pairs in order to score extra points. The couple were awarded five out of a possible seven and ended up second on the leaderboard following both dances.

They were then safely voted through to this week on the results show on Sunday evening.

McGee’s Sunday morning programme on BBC Radio Berkshire was hosted by Andrew Peach but she spoke to him about her week.

She said that during a trip to a TV interview she ran into comedian Michael McIntyre who told her that he had to keep checking her age as he was so amazed by her performances.

McGee said: “I’m a realist and I knew the Argentinean tango suited me but now I have to focus on my dance this week.

“Being in the bottom two does challenge you and I think my competitive spirit really came out. Being in the dance-off hits you like a tonne of bricks.

“I couldn’t pick up the tango on the Monday morning, I was just exhausted and emotional.

“Every bit of me is starting to ache. This week was my hardest on the show but also my favourite Strictly night apart from the first one. I always watch my dances back on the Sunday night and I’m never happy but I watched this one and was very proud.

“None of us want this to end because it’s such a lovely experience. It’s going to be a big wrench when it finishes, I’m going to miss them.”

McGee, the widow of magician Paul Daniels, said she was so busy with rehearsals and interviews that she had barely been back to her home in Willow Lane.

She is also learning lines for her appearance in Beauty and the Beast at York’s Grand Opera House.

McGee said she had been avoiding social media, explaining: “I’ve had to not look at it because the negatives get to you. From week one it has been ‘you’re a professional ballet dancer’ but I haven’t danced in years.

“But the support has been the best thing about this experience.”

Peach played McGee some messages of support from Liberal Democrat leader Vince Cable and BBC presenters including Alex Jones and Victoria Derbyshire with Jones even predicting she would win.

On Sunday’s show, comedian Susan Calman and her professional partner Kevin Clifton were voted off after a dance-off with singer Alexandra Burke and Gorka Marquez.