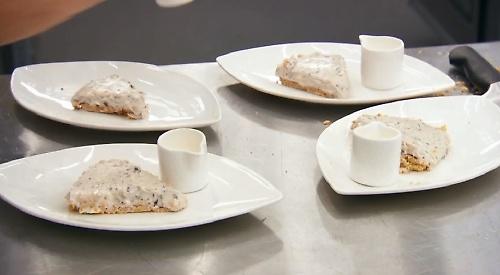 SINGER Carol Decker had a collapsed cheesecake to blame for being kicked off Celebrity MasterChef.

The T’Pau vocalist might have made it to the semi-final of the BBC show if it hadn’t been for a disaster in Friday’s episode.

Her white chocolate and blueberry cheesecake did not set and then collapsed when she served it to judges Gregg Wallace and John Torode. A guest judge described it as being more like a face pack.

The judges then chose former England rugby player Martin Bayfield and Union J singer Josh Cuthbert to go through to the semi-finals rather than Decker and actor Keith Allen.

It was a disappointing exit for the 60-year-old entertainer from Henley who had earlier shown considerable skill at cooking.

She had been coached by her husband Richard Coates, who is executive chef at Bodeans in London and has spent more than 30 years working at restaurants in the capital as well as once running the Cherry Tree in Stoke Row.

The couple trialled some dishes for her to cook on the show at their home in Greys Road.

On screen, the judges praised Decker for her chilli con carne, cod wrapped in parma ham, chocolate fondant and guinea fowl served with a mushroom and cream sauce. In her first appearance, she made the chilli dish as the celebrities took part in the “mystery box” challenge in which they could use only the ingredients they are supplied with.

Bayfield made a made a prawn curry and Decker said: “I would eat that, that’s girly food. I’ve cooked man food and you’ve cooked girl food.”

Bayfield responded: “Should we swap?”

She replied: “Yeah, I’ll come round to your house!”

Fans of the show accused her on social media of being “sexist”.

Decker was then sent to the Leicester Square Kitchen, a Mexican and Peruvian restaurant, to work alongside Cuthbert.

She cooked a fish dish under guidance from the head chef.

To finish the episode, the celebrities had to create a two-course menu of their own design in an hour.

Decker prepared her cod dish with a pea purée and a broth made from the leftover parts of the fish and mussels followed by a fondant served with ice cream and raspberries.

As a result, the judges ranked Decker and Bayfield as the top two celebrity chefs.

For Friday’s episode, Decker was paired with Allen, father of singer Lily Allen, as they were each challenged to make identical blueberry pancakes served with maple butter, a walnut brittle and blueberry compote — without seeing each other working.

The judges praised the pair for the similarity in the appearance of their pancakes.

Wallace said: “They are nice and light, fluffy and teeming with blueberries. They are just superb, absolutely super.”

Torode added: “I am proud of you two, you’ve done a fantastic job.”

Speaking after the task, Decker said: “It was hysterical — I absolutely loved it.” She and Allen were then shown cooking for 60 workers at Tilbury Docks, the largest port on the River Thames.

They chose to make lasagne and mac and cheese for vegetarians, both served with garlic bread and buttered cabbage.

Allen made “Aunt Betty’s bread and butter pudding” with apples and custard while Decker was responsible for the two main course dishes.

She said: “I make the dishes at home and I’m good at it but that’s only for four people. This is going to be completely different.”

The pair finished everything in the required two-and-a-half hour window before serving their food to the dockers. They received generally positive feedback with the lasagna being described as “flavoursome” and Torode calling it “decent”.

The judges did question their decision to serve pasta with cabbage, however.

After the challenge, Decker said: “I am completely shattered after that service. I am going to have a massive glass of wine and a nap!”

The final test was to make another two-course meal for the judges as well as former Celebrity MasterChef champions Emma Kennedy and Sophie Thompson and 2015 finalist Sam Nixon.

Decker made her guinea fowl dish, which was served with asparagus, followed by the cheesecake. She told the judges she chose the dishes as she was sick of cooking with mince, which was what she mostly cooked at home.

Decker said: “This is food I would love to eat. I’m not a massive pudding girl and would say I am more of a good cheese and biscuits kind of girl so hopefully I will get it right. The cheesecake is my biggest worry.”

Torode said: “The guinea fowl is cooked to perfection. Both the leg, which has a crispy skin, and the breast are moist.”

Wallace said he would have liked the sauce to have been thicker.

Decker’s worst fears were realised when she served her pudding and it collapsed on the plate.

Thompson, an actress, said it looked more like a “face pack than a pudding”.

Wallace said: “It is so wet and she served it with cream, which is the last thing it needs.”

The judges praised the singer but said the cheesecake had let her down before breaking the news that she had not made it through to the semi-final.

Decker said: “I’m really sorry to go but I am proud of what I have done. I will definitely cook some of the things I have learned to cook for the show at home for the kids so they don’t have to put up with my mince every day!”