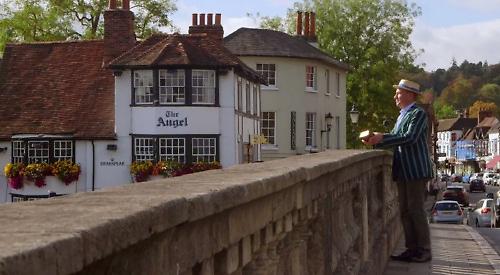 AUTHOR and broadcaster Michael Portillo visited Henley to learn more about how important the railway and River Thames is to Henley.

It was for his Great British Railway Journeys series on BBC 2 and the episode was shown on Tuesday.

Portillo, who was wearing a green striped blazer and armed with a copy of the old railway guide, Bradshaw’s Handbook, travelled from the start of the branch line at Twyford.

He said: “According to my Bradshaw’s timetable you could reach Henley-on-Thames from London a century ago by train in just over an hour, opening up its river playground to city dwellers.

“The first [rowing] race between Oxford and Cambridge was held there in 1829 and the first of its world famous regattas 10 years later, becoming royal in 1851.” On arriving in Henley, he said it was “time to mess about in boats” and put on a boater.

Portillo added: “In Henley, it really is all about the river and you don’t have to be an oarsman to enjoy it.”

He then walked down Thames Side where he was met by Jonathan Hobbs, the fifth generation of his family to own the boat hire company Hobbs of Henley. The pair then went on the river in a slipper launch.

Portillo asked what was so special about the river in Henley and Mr Hobbs replied: “It’s one of the only places on the upper Thames where you can go down a nearly two-mile straight bit, which is why the Boat Race started here before it moved to Putney. Of course all the people running pubs and hotels were up in arms because there was a massive increase in trade from the Boat Race being held here.

“They said ‘we need to have races here to get visitors to watch rowing so they can fill our bars, our pubs and our shops’.”

The branch line opened in in 1859 and brought huge numbers of visitors to the town.

Mr Hobbs said: “There was a real boom then of people wanting to get out on the river in punts and skiffs. You could walk across the regatta course without touching the water. Health and safety nightmare, as you can imagine.”

Portillo spent the night at Leander Club, which he described as a “privilege” before having a look round and adding: “I am in awe”.

The following morning he continued his journey to Cookham.