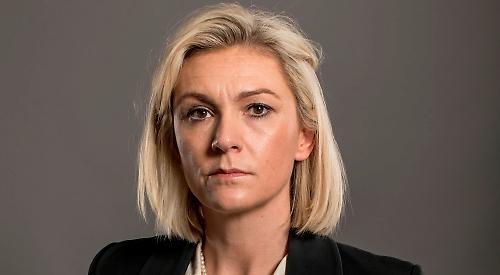 A DETECTIVE from Henley who made her television debut in 2018 returned to the small screen last week.

Dc George Bradley, who is coming to the end of a two-year career break from Thames Valley Police, is one of 15 current or former officers tasked with tracking a gang of “criminals” on the second series of The Heist.

The show follows a group of nine contestants who must plan and carry out a mock bank robbery in which they pocket £1 million then attempt to remain hidden for a month.

Those who evade capture during that time may keep their share of the cash.

The police offcers, who were recruited from across Britain, worked for 24 days in shifts of up to 12 hours from a temporary “incident room” in Alnwick in Northumberland when filming took place last summer.

Dc Bradley, 44, filmed the first series in 2018 and was invited back a month after this was broadcast, but was not allowed to reveal this until now.

She also can’t reveal what happens this time but says she and the other officers, who caught all bar two of the competitors last time, did themselves proud.

She said: “The first series was a huge success but this one is bigger and better. People who enjoyed the last one should definitely watch it as it’s not just more of the same.

“It was very well-received and I was chuffed to be asked to come back because not everybody was.

“The first time, they edited my performance to make me look quite intimidating and a bit of a ‘bad-ass’ cow. I was pretty grumpy this time round because the days were so long. I’m terrible at acting so it’ll show what I’m like at least some of the time.

“They filmed me running around a lot and looking very athletic, so it was physically more demanding this time round. It was a beautiful location with lots of countryside and I was pleased that I got to drive a phenomenally fast and posh car. We also did a lot more covert surveillance.

“It isn’t easy because you’re going straight from working to sleeping and back again for days on end, just like in the real job, and you’ve got to keep on top of every new development.

“I’m working as a swimming instructor so my life is very active but this was a different kind of busy and much more of a mental challenge. I had to draw on all the skills from my police job while talking to the cameras and not stumbling over my words.

“It was enjoyable, though, because there’s a very tight bond with the team and you get away from your regular life for a while.”

Dc Bradley joined Thames Valley Police in 1998 shortly after moving to the area and spent her first six years as a police constable in Didcot. She became a detective in 2005, two years after she moved to Henley, and served mostly in a team covering all of South Oxfordshire.

She embarked on her career break in early 2018 as she was approaching her 20th work anniversary and wanted to spend more time with her family. She is currently working part-time at Henley leisure centre.

• The Heist is shown on Sky One at 9pm on Thursdays.