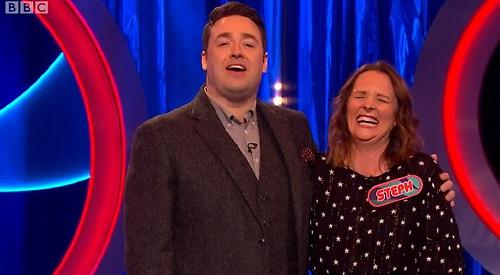 A DANCE teacher took her family on the “holiday of a lifetime” to New York after winning a television game show.

Steph Maxwell, of Newtown Gardens, Henley, won £6,727 when she appeared on the first episode of the BBC’s First & Last in January and decided to treat husband Paul and daughters Lottie, 12, and nine-year-old Holly.

The family spent three days during the February half-term in the “Big Apple”, where they watched a Broadway show and went ice skating in Central Park.

When they arrived at Heathrow Airport the girls had no idea where they were going. The surprise was revealed when their mother handed them dollars for spending money and tickets to see Frozen on Broadway.

Mrs Maxwell, 41, said: “They knew New York was on the cards after seeing me on TV but it was only when I presented them with the tickets that they realised what was happening.

“Lottie cried and Holly took a bit longer to work it out. Paul and I had been before but it was really nice for the children because it was their first time.

“We have only ever done Spanish and Greek summer holidays so it was quite a shock for the girls to be on a plane for just over seven hours.”

The family, who stayed in Manhattan, also went on a shopping trip and went to the top of the Freedom Tower, also known as One World Trade Center.

Mrs Maxwell said: “We tried to do things we hadn’t done before. The girls loved it and they loved going in the shops.

“It was very, very cold — it was minus 6C on one day but it was beautiful and sunny.”

Mrs Maxwell used to work as a stewardess for Virgin Atlantic so had been to New York before and it was also where her husband proposed to her near Times Square 18 years ago.

She said: “We were talking to the girls about our special memories of that trip. Paul surprised me because I didn’t expect it to happen. It certainly holds special sentimental value for us.” Mrs Maxwell, who runs the Divas and Dudes Dance Academy, said seeing Frozen was the highlight of the trip, particularly for Lottie and Holly, who attend Gillotts School and Trinity primary respectively.

She said: “I went to a few shows on my own when I was cabin crew and it was spectacular. They have lots of things that are not even on in London so you get to see them first.

“The tickets were £375, so it’s not something you can do every day. Having that extra bit of money was a bonus.

“The girls have come back to school a little bit tired but they are bragging about it to all their friends.”

In order to win the TV show, Mrs Maxwell had to tackle a series of challenges where the aim was not to be the first or last contestant in each round.

This included jumping out of a box at the start of the show, picking an Instagram hashtag, weighing potatoes and choosing London Marathon runners who had competed in fancy dress.

In the final round, she was one of three contestants who had the chance to win £10,000. They were asked to pick a sum and the person with the middle value took home that amount of money.

Appearing on a game show was part of Mrs Maxwell’s 40th birthday wish list, which also included completing the London Marathon, performing in a stage show and visiting Venice with her husband.

She now plans to apply to appear on more TV shows.

“I think I have got the bug for it because I really enjoyed it,” she said. “I like to have fun and I think I have learned that I actually have a competitive edge.

“Jumping out of the box at the start of the show was my favourite part. It was very nerve wracking but that was the first moment I saw the audience and realised I was going to be on TV.

“If I was on Instagram I would have tagged First & Last because I was so thankful to them for allowing me to have this lovely experience.”