Isolation under the spotlight 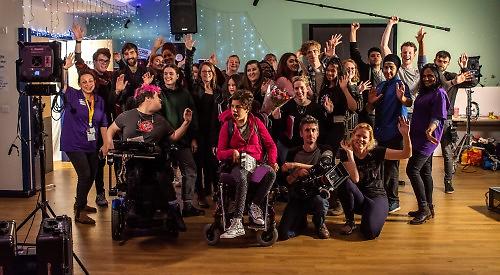 A DISABLED teenager has written and directed a short film for the BBC about how social distancing is a way of life for people like her.

Katerina (Kitty) Holmes, 19, wanted to challenge perceptions of people who are seen to be different from themselves.

Speak to Me, Listen to Me shares the experiences of people who are living with a profound disability and how they are sidelined on a daily basis.

The three-minute film follows Jay (Ed Clements), who gets lost on his way to meet Kate (Kate Caryer) from Metaler Magazine and finds help from an unexpected place.

When he arrives at the venue with the help of Lou (Imogen Roberts) he finds out that Kate isn’t the person he was expecting her to be.

Jane Holmes, Kitty’s mother, who lives in Ruscombe, said: “The story follows a young photographer who is on his way to a gig but loses his way and has to ask for directions.

“He approaches someone with Down syndrome and she helps him get there.

“Then, when he arrives, he is looking for a journalist and completely ignores a young woman in a wheelchair with cerebral palsy, who is the person he has come to meet. It is a very important message that she is presenting she is educating and challenging people’s perceptions of disabled people.

“For me, it is very hard to have a child who has faced these kinds of challenges but she has grabbed the opportunity to do something about it with both hands.”

Kitty has severe cerebral palsy and is in a wheelchair. When she was young she was judged by her school as not being able to tell the difference between yes and no and was described as a “sensory learner”, which was strongly denied by her parents.

She was, and remains, unable to talk and communicates by pointing to letters on a board but it was only when she started at a specialist senior school that her intellect was fully recognised and her writing talents blossomed. Kitty has since written many short stories, winning competitions and having her work published.

In 2019 she was commissioned by the BBC, through Screen South, to write a short film highlighting the attitudes of mainstream people towards those with disabilities.

It was filmed at her college in November 2019 and Kitty loved directing it.

Jane said: “There were clapperboards and screens and a lot of the time the actors would ask her questions to make sure the scenes were acted in the way that she wanted them done.

“It was also really interesting seeing her through the eyes of other people and seeing her given the level of respect that she deserves and seeing people want her opinion on things they are doing.

“She lived for a long time without people understanding her and she had quite a chip on her shoulder because she didn’t want to be defined by her disability. When she realised people got her, it was fantastic and this is the pinnacle.

“Kitty absolutely loved the whole process and she has set up her own arts company, Ignite Arts, and she would love to do more.”

The BBC has not yet announced when the film will be aired but to see the trailer, visit https://ignite-arts.co.uk/speak-to-me/