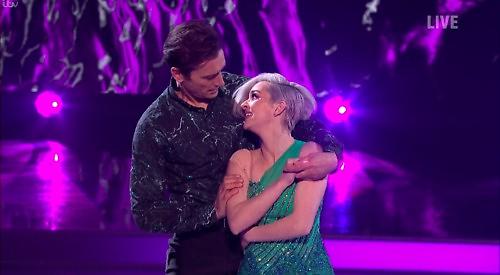 GRAHAM BELL was knocked out of Dancing on Ice in only the third week of the competition.

The five-time GB Olympic skier, of New Street, Henley, was placed joint sixth out of nine contestants in Sunday’s episode of the ITV show.

He and his professional partner Karina Manta danced a Fifties-themed routine set to Born To Hand Jive from the musical Grease.

But the pair failed to secure enough votes from viewers to avoid the “skate-off”, which they then lost as the judges decided to keep model Rebekah Vardy and her partner Andy Buchanan in the show.

Bell, 55, wouldn’t comment on the judges’ decision afterwards but said: “I think anyone who watched it can make up their own minds.”

The show was themed around musicals and opened with actor and judge John Barrowman singing When I Get My Name In Lights from Legs Diamond.

For their routine, Bell wore a black leather jacket and trousers with slicked-back hair to resemble Danny Zuko, the leading male in Grease, while Manta was dressed as his love interest Sandy in a frilly knee-length pink skirt. Before their performance, viewers were shown highlights from the previous week’s routine, which was themed around skiing and set to the theme tune of the BBC’s Ski Sunday, which Bell presents.

There was also a short clip from rehearsals in which Bell admitted: “When I came into this I was worried about my ‘dad dancing’ and now I’ve got to match John Travolta.”

He was also seen posing in character in the mirror and being teased by rival and fellow GB Olympian Colin Jackson, who said: “Nice moves, fella.”

Bell and Manta opened with several spins before he lifted and carried her in his arms as she performed hand-jive motions.

They spun around each other several times then danced towards the camera, repeating the hand moves.

Bell picked up Manta and carried her on his shoulders as she stretched her arms out wide and the pair finished with him posing with one arm in the air and another on his hip.

Judges awarded them 25 points and repeated their criticism of the previous week that the couple hadn’t put enough feeling into their routine.

In a nod to the show’s song Greased Lightnin’, Bell told the panel: “I thought it was automatic, it was systematic, it was hydromatic. I loved it — you don’t get to do this every day and it was awesome.”

He said he and Manta’s next routine would be themed around Olympic ice dance champions Jayne Torvill and Christopher Dean, who are both judges.

He said: “We’ve been studying a couple of British dancers who were at the same Olympics as me in 1984. This week I was Danny Zuko but next week I’ll be Christopher Dean — those are some big shoes to fill.”

Torvill said: “For this routine, you were in and out of character and often on two feet whereas last week’s routine had more content and changes of hold. I’d like to see more of that.” Dean said: “The dancing isn’t within your comfort zone, though you gave it a good go… you basically skated forwards and backwards with some elements in between and I think you can do some more intricate skating.”

Barrowman said: “Your characterisation was spot on… but I want to see more pizzazz and it’s up to Karina to bring that out of Graham.”

Ashley Banjo, a dancer, said: “You’re a great skater and it was a solid performance but there are moments where it feels a bit flat and you could have more character in how you choreograph and interpret the music.” Vardy and Buchanan, who also received 25 points with a routine set to Let’s Face The Music And Dance from Follow The Fleet, were first in the skate-off with a piece set to My Life Would Suck Without You by Kelly Clarkson.

Bell and Manta’s routine was set to Many of Horror by Biffy Clyro and ended with Bell skating towards his partner at speed and sweeping her off the ground.

He had a tear in his eye afterwards and told judges: “I love that song. I think we gave it everything, with a lot of heart.”

However, the judges said they “connected” more with Vardy’s performance and she had made a greater effort to improve so would be going through.

Some fans criticised the decision on social media, saying Vardy spent much of her skate-off being lifted by her partner and even appeared to stumble while executing one lift.

Manta told viewers: “I’ve really enjoyed it and have been very impressed with Graham as he hasn’t been skating long but has really been up for it and embraced the challenge.”

Bell, who lives with his wife Sarah and children Louis and Lottie, told the Henley Standard that it was “disappointing” to go out so early in the show as he was hoping to be reunited with his original partner, Yebin Mok.

She was injured shortly before the opening week when she cut her shin on Bell’s blade but continued to coach him and Manta, a fellow American who was brought in as a replacement.

Bell said he had enjoyed learning to skate and would keep it up as it used many of the same muscles as skiing.

He said: “I enjoyed the training hugely, more so than the actual competition.

“It’s a shame it’s over as Karina and I thought we had some good, technical skating still to come.

“We were working on a move inspired by Torvill and Dean where I’d be skating backwards with my leg lifted and Karina lying on it. It was great but we’ll never get to show it.

“My problem now is that it looks like the ski season’s over for the winter. My next big job was going to be the summer Olympics at Tokyo but that’s not looking great either.

“I’m not going to get too depressed and will just have to lock down like everyone else. I’m looking forward to keeping the skating up because it has really helped with the small bit of skiing that I’ve been able to do lately.”

Bell had never skated before, apart from a few brief attempts as a child, and was helped along the way by salsa dance teacher Jennifer Benavidez, from Shiplake, and Athlete Service, of Greys Road in Henley.

This was his first time as a reality TV contestant, although he was a mentor in Channel 4’s The Jump.