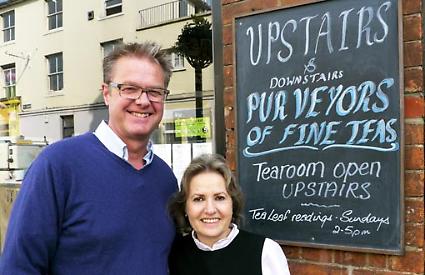 He visited the Upstairs and Downstairs tea rooms in Duke Street to film scenes of Put Your Money Where Your Mouth Is.

In the BBC 1 programme, Hearnden competes against another presenter to see who can make the most money from buying and selling antiques.

He haggled with Lorraine Hillier, who opened the tea rooms last month, over an Art Deco vase he was selling. Later in the day he visited Woods Wines and Cottage Upholstery in Nettlebed and an interior designer in Shiplake.

Hearnden, 53, who grew up in South Oxfordshire and was educated at Shiplake College, has appeared in every series of the show since it began in 2008. He said he would be filming the latest series over the next month and many scenes would take place in and around Henley.

Last year, he set up the Third Sector Gallery in Newtown Road, which supports charities by loaning art for silent auctions and last month he presented a £26,636 cheque to the Henley Festival Trust.

He said: I like to film with Henley businesses as often as I can in order to support them. I grew up in this area and it is always fantastic to film here because its so picturesque and the people are lovely.

Miss Hillier would not say whether she had bought the vase but called Hearnden a very experienced haggler. She added: It was a great opportunity to showcase the new shop and my staff really enjoyed being in a few shots.