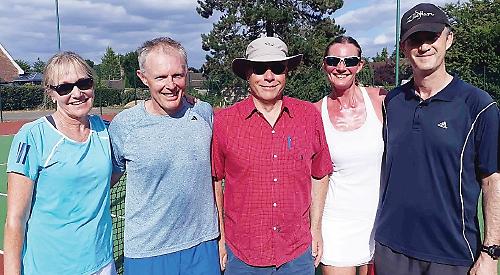 DAVID RANKIN and Sally Foster secured the men’s and ladies’ singles titles respectively at Mapledurham Lawn Tennis Club’s finals day which was played out in hot conditions at Caversham Heights on Sunday of last week.

All matches were umpired by volunteers with newly acquired umpire’s chairs giving a touch of ceremony and drama to the occasion.

All the matches were competitive with the men’s over 60s singles match seeing the second set go to 12 deuces before Philip de Sausmarez finally broke David Maynerd’s serve for the first time.

The full day’s programme started at 9.30am with the vets singles and ran all through the day on two courts, finally finishing at 6pm with the mixed doubles and U12s singles.