Thomas bags two out of three crowns at Memorial Avenue 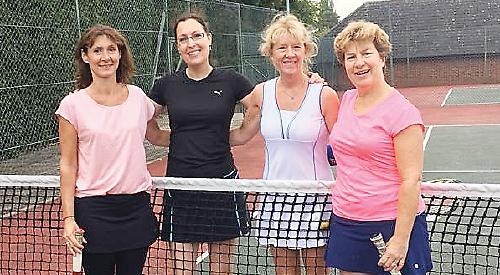 The first match of the day saw Sharon Hearn and Cosima Wagner beat Jenny Berger and Katie Binning to secure the ladies’ doubles title while in the men’s doubles final Matt Thomas and Tom Cary took the honours beating Tim Verran and Archie Spiers. This was the first of Thomas’s three finals during the day.

The first junior match of the day saw Annabelle Richardson beat Alec Steel in the U12 singles final 6-3, 6-2 while Rosie Richardson secured the U14 title beating James Johnson in two sets.

Jack Lynskey won the U16 title in two sets beating Millie Thomas while Zoe Richardson beat Ben West by two sets to one to secure the U18 crown in a repeat of the previous two years finals.

The ladies’ singles saw Nikki Botterill beat Caroline Edwards in a repeat of the previous year’s final while Matt Thomas’ second final of the day saw him beat Nigel Richardson to secure the men’s singles title. Alfred Cary and William Smith beat Noah Thurgood and Harry Rechner to win the U10 doubles while Zoe Richardson, playing in her second final of the day, with partner Henry Peters lost out to Tom Lynskey and Lottie Botterill in the U18 doubles by two sets to one. Howard Poll and Clare Pelling, both left-handers, won the veterans’ doubles title by beating Colin Main and Sheena Darke.

The U12 doubles final saw Evie Blomfield and Theo Scampion defeated by Annabelle Richardson and Megan Weatherston in a close match. Matt Thomas, playing in his third final of the day lost out in the mixed doubles with Sarah Blomfield in a hard-fought encounter against Tim Rose and Georgie O’Brien.

The mixed doubles plate, for losers in the first round of the mixed doubles, saw Caroline Cousins and Tim Verran — in his second final of the day — beat Julia Foskett and Alan Mitchell.

Noah Elrington and Lucy Blomfield beat Will Verran and Rosie Richardson in the U14 doubles while Meg Hearn and Sam O’Brien lost out to Jack Lynskey — in his second final of the day — and Ashleigh Poolan in the U16 doubles.