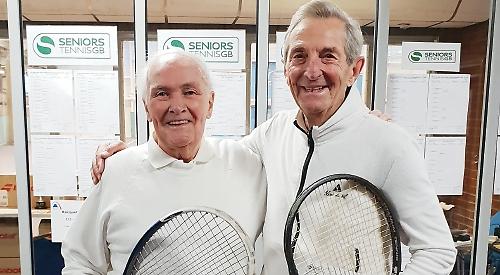 TWO tennis players with a combined age of 156 have returned triumphant from the British Open Seniors Indoor Championships as winners of their respective age groups.

Leonard Phillips, 84, from Medmenham, triumphed in the over 85 category while his training partner, Henley’s Alex Templer, took the honours in the over 70s section at the tournament held last week in Tipton, Birmingham.

Phillips, who was able to play in the over 85 category as he turns that age later this year, beat Michael Cottee in the quarter-final and number one seed Gordon Oates in the semi-final.

In the final Phillips, the GB number two in his age group who is ranked 18 in the world, used his fitness and speed around the court to defeat Peter Ellisson 6-2, 6-1 and claim the title.

Meanwhile 72-year-old Templer had a bye in the first round before beating Richard Allen, John Brewins and Wilf Jessop on his way to the final. Templer beat Rennie Johnson 6-0, 6-4 in the final to claim the title. Templer — who teamed up with John Spratt — also competed in the over 70s doubles event where the pair made it through the quarter-finals before going out of the tournament at the semi-final stages. Templer, who is ranked 24 in the world in his age group and number two in Great Britain, won the Scottish singles and the Barcelona and the German doubles last year.