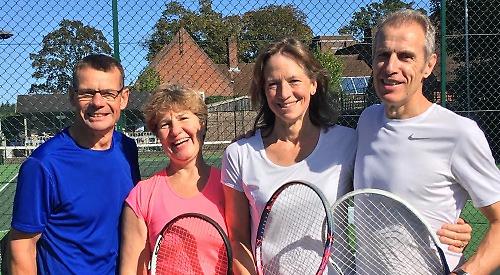 SHIPLAKE Tennis Club’s finals day got under way with a repeat of last year’s final with number one and two seeded players Nikki Botterill and Caroline Edwards contesting the ladies singles trophy in a match that lasted three hours.

The first set saw Edwards suffer a fall and need medical attention for a gashed knee as Botterill triumphed 7-6.

In the second set Edward hit back to win 6-4 but Botterill won the deciding set 6-2 to secure the title.

The first set started well for Berger and Lynskey who broke serve and went into a 2-0 lead. Hughes and Greenslade proved to be tricky opponents at the net and took the next six games to secure the first set.

Berger and Lynskey perfected the art of lobbing to outfox the Greenslade and Hughes combination as their tactics and the style saw them level the match as they won the second set 6-4.

In the final set Greenslade and Hughes showed poise and control to deliver good lengths on the baseline putting their opponents under pressure with the returns to win the set 6-4.

The men’s doubles saw Andy Stallwood and Archie Spiers take the honours as they defeated Tim Rose and Nick Wrigley in straight sets.

Club coach Rose and partner Wrigley put Stallwood and Spiers under pressure with good volleying and solid ground strokes but their opposing double were on form with few unforced errors as they won the title 6-2, 7-5.

A series of double faults from both players saw breaks in serve in what was a nervy start from both players. Head eventually got in his stride and put pressure on Richardson with powerful serves and an unforgiving forehand.

Both players showed impressive athleticism with plenty of running on both sides of the net but youthful legs helped Head retrieve many a testing shot from Richardson and run out 6-3, 6-4 winner.

The triumphant pair stamped their authority on the match with Peters playing pinpoint baseline shots whilst Greenslade prowled the net intercepting many a cross court shot from both Carolines. Slightly overwhelmed by this play in addition to Caroline Edwards feeling a bit tired from her epic singles encounter, the Carolines lost the first set in quick time.

The Carolines rallied in the second set and despite making fewer errors, were outplayed by an on-form Peters and Greenslade who won the set and match.

Karen Peters returned to the court to partner Jeremy Morgan and win the mixed doubles title against Mike Lynskey and Nikki Botterill who themselves had already played in previous matches with mixed results.

Morgan’s solid and often faultless play, combined with Peters’ epic forehand, proved too much in the first set as they won 6-2. The duo turned on the style in the second set to ease to a comfortable 6-0 win.