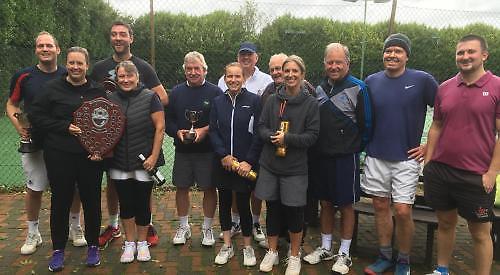 James Franklin and Andy Lee had an epic battle with Dom Cusk and Simon Thorp winning 7-5 in the third set in the men’s doubles. Helen Lee and Ellie Fry beat Louisa Bisson and Lucy Archibald in the ladies doubles. The day culminated in a victory for Ellie Fry and James Franklin over the mother and son partnership Helen and Andy Lee in the mixed doubles.

The men’s veteran doubles was won by Vic Fry and Stuart Drew over the established paring of Mike Harris and Tony Price, runners up for the second year running.

The club will now turn their attention to the winter league where the men’s first team has just started its matches in the top division in Berkshire up against the likes of Windsor, Bracknell and Maidenhead. Peppard also run a second men’s team, a ladies team and two mixed teams all in the Berkshire league.