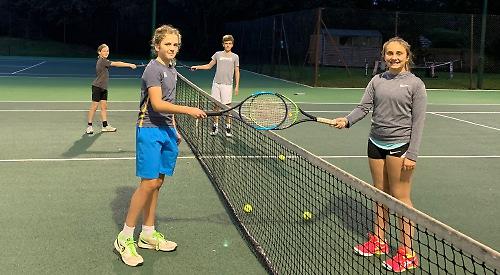 TENNIS clubs in the Henley area are frustrated that they have had to close during the current coronavirus lockdown.

Officials are unhappy because they feel the sport can be played safely while keeping 2m apart.

From May until November 2, outdoor courts had only been open for matches between two people from different households or doubles of four players from the same family.

Other measures put in place to minimise the risk of infection included players using their own equipment and marking balls so they only touch their own.

But the Government said all indoor and outdoor sporting facilities would shut for a month until December 2.

The Lawn Tennis Association, the sport’s governing body, tried and failed to overturn the decision.

Colin Main, chairman and coach at Henley Tennis Club, said: “There has been a lot of frustration that we have been locked down again and a lot of our members can’t understand it.

“It is frustrating when you look at the distance between the players on the courts and they don’t really have to come into contact with one another.

“We even had to tell one player, who had brought with her a ball machine, that she couldn’t play on her own.

“When we were allowed to re-open last time we implemented a booking system to avoid lots of people turning up at the same time.

“We also put up signs and QR codes so people could report they have visited and have provided hand sanitiser.” Mr Main said that the club had enjoyed an influx of 80 new members since the first lockdown and had just hired a new coach when it was told to close down.

He added: “It is sad that we are suffering, particularly when locally we have pretty much avoided a lot of the issues that other areas have faced.”

He said: “We have had to lock everything down entirely with the Government rather strangely deciding you can go out for a walk standing next to other people but you can’t play tennis across 20 metres of court.

“It is very frustrating not just for myself but all the members who can’t understand why we can’t play singles or with others who are in your secure bubble.

“We have quite a few families and members and they could have used this time with parents playing with their children.

“The Government says it wants us to play more sport and yet it seems determined to stop us playing
tennis.” Mr Smith said the club gave a subscription rebate during the first lockdown but it was unlikely to do the same this time around.

In the meantime, the courts have been cleared of leaves and moss and the clubhouse cleaned ready for
re-opening.

Paul Day, chairman of Benson Tennis Club, said: “It is frustrating that we can’t get on court and play. It was great when the restrictions were lifted the first time round as it gave you something to do to break up the day.

“Being outside and following social distancing rules and not using the clubhouse made it all feel very safe and was a relief for all the players. It is just very sad now to see the locked-up and desolate-looking courts.

“I can understand that frustration but I feel it is our duty to follow the rules.”

Phil de Sausmarez, chairman of Mapledurham Lawn Tennis Club, accepts the decision to shut the courts but doesn’t think doing so will make much difference in the virus fight.

He said: “I do wonder, particularly playing as singles and with your own ball, the risk of transmission is infinitesimal.

“I suppose a lot of it is about how it looks. If you have a bubble of four and you see them all playing each other you may not know that they are from the same family.

“Yes, it is frustrating but you can understand why the Government has done it. There are times that you have to just accept the rules.”

He felt that there was unlikely to be a major impact on the club as he expects junior coaching to expand once the Heights Primary School is finally built next door.

He said: “We get the impression that the Government didn’t want to make any exceptions notwithstanding the fact that we consider that with tennis you will have a limited chance of creating any problems.

“It just goes against what the Government is trying to achieve in terms of keeping people active and fit and we are very much hoping that come December we can continue as we were before.”

While the club has been shut the courts have been pressure-washed and the fencing around them is being replaced.

Anthea West, who chairs Goring Tennis Club, said that she hasn’t had any negative feedback from members about the restrictions.

She said: “I have a feeling that most people are accepting of the situation because it is only supposed to last four weeks.

“It did take a while for the restrictions to come out of the LTA as it was trying to negotiate with the Government.”

Ms West said she felt sorry for tennis coaches who now found themselves out of work but at least it would not be for long.

She said: “Personally, I think the lockdown is quite a good idea and everybody is in the same boat — golf clubs are also closed.

“We are fortunate to live where we do, around Henley and Goring, and so there are still plenty of opportunities to exercise and get some fresh air.”