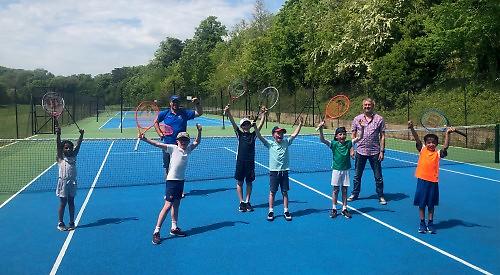 FLOODLIGHTS are to be installed at Henley Tennis Club.

The club, off Tilebarn Close, has been granted planning permission by South Oxfordshire District Council for nine lights on 7m high poles on two of its five courts.

These will be able to be used until 9pm and the club has agreed to protect surrounding trees when the poles are being put it. The club’s application was supported by Sport England and residents who said the club had proved to be a lifeline during the coronavirus pandemic.

Club chairman Colin Main said the floodlights would enable tennis to be played year-round as the lights would be used in the evening in the winter months.

He said: “The extended opportunities for social, training and competitive play are fantastic. I thank everyone at the club and outside who contributed to this success story.”

Head coach Tom Scott said: “This is not just fantastic for the club but also the community.

“To be able to offer a coaching programme all year-round will only strengthen the club’s foundations and I can’t wait for a winter of extended play.  There has been an incredible amount of hard work and dedication from Colin and the committee to get this over the line. We owe them a big thank-you.”

Last week, three of the club’s under-eight players were chosen to represent Oxfordshire. They are Hudson Lynch, Alexander Jamie Berka and Sebastian Sheldon.