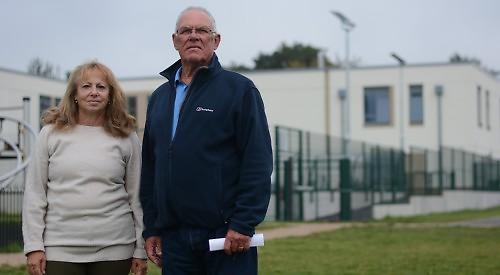 RESIDENTS have accused a new school of not listening to their concerns.

Neighbours of the Heights School, which opened at its new site on Mapledurham playing fields in Caversham Heights earlier this month, say they are concerned about congestion on surrounding roads and being disturbed by the school but have been ignored.

Members of Warren and District Residents’ Association campaigned against the school moving to the site off Upper Woodcote Road from its “temporary” facility in Gosbrook Road, Lower Caversham, where it opened in 2014.

Chairwoman Elisa Del Galdo and secretary Martin Brommell claim the school has beeen unwilling to engage with the association, which represents 300 households.

Mr Brommell, who lives in Hewett Avenue, which runs along the side of the playing fields, said: “What Wadra wants more than anything else is the ability for the committee to meet with the school on a regular basis in the early days and then to schedule a more sensible timeframe moving forward.

“We want to work together, head issues off and compliment each other. I think we can exist harmoniously.

“The first thing the school should have done is call a residents meeting and invite people to come along. They would have known there would be a lot of rotten fruit thrown at them, but people could air their issues and they would prioritise the top five.

“We have been accused of being anti-school, which is probably fair because part of our purpose is to protect and enhance the environment in which we live. This is not protecting or enhancing it in any way.

“The two-storey building now dominates the space previously occupied by trees and is a constant eyesore to the affected residents.

“Appeals to have a mural painted on the walls have all fallen on deaf ears. You can’t get anyone at that school to listen. I’ve made tons of representations on behalf of the residents’ association to have access to a community user group to the school.

“They’ve held one meeting that was over Zoom during lockdown last year and it felt like it was seven people versus me.

“There has been nothing since and the only engagement has been leaflets through the school about it opening. We would be willing to get around a table but they aren’t.”

Mr Brommell said residents were concerned about road safety issues caused by the increase in traffic and having to put up with lights from the school’s multi-use games area shining into their homes in the evenings.

He also claimed dog walkers felt “intimidated” after being told to put their pets on the leads while children were using the space.

Mr Brommell was chairman of Mapledurham Playing Fields Action Group, which sought a judicial review at the High Court in an effort to prevent the school being built.

He said: “We wouldn’t have raised nearly £100,000 to take the case to court if we hadn’t had a lot of backing from the residents.”

Mr Brommell said the association had many ideas to help avoid congestion, such as using an electric bus to reduce car journeys and introducing a “school street”, which would put a temporary restriction on vehicles during drop-off and pick-up times. He also said the number of vacant places at other schools in the area undermined the original business case put forward for relocating the Heights.

Mrs Del Galdo said the lack of engagement from the school was frustrating.

She said: “Wadra has been banging on about the safety of the roads around this school since the planning stage and they didn’t engage at all. My last letter was very congenial and said the school was to open in six weeks and we needed to get together, sit down and work out what needed to be done. I had no reply. Only recently did we get an email about how they would have a lollipop lady or warden.”

When it first opened, the school had 61 pupils across reception and year one. Now it has about 350 children going up to year 6.

Reading Borough Council, which is a trustee of the playing fields, carried out a public consultation on five possible sites for the new school and more than 70 per cent of respondents chose Mapledurham playing fields.

Mrs Del Galdo claims the survey was “flawed” as it was open to all residents of Reading instead of just those affected.

She said: “At the time there were 1,074 houses in the area and 998 voted against the playing fields.”

The campaigners also claimed the development would breach a covenant put in place when the land was gifted to the community for leisure purposes by Charles Hewett in 1938.

The Education Funding Agency offered £1.36 million to improve leisure facilities on the playing fields in return for a lease on 1.2 acres of the 25 acres for the school and the council agreed. The email address is community@theheights
primary.co.uk

THE Heights School said that its arrival had brought improvements to the playing fields.

These included better access with a zebra and refuge crossing on Upper Woodcote Road (A4074) and new points of entry.

There were wheelchair-friendly pathways throughout the fields, a new car park, a new playground, new fitness stations and a multi-use games area available for community use outside school hours.

In addition, the pavilion had been upgraded, as had the football pitches.

The school said it had looked at the School Streets scheme with Reading Borough Council’s travel and transport team and it was deemed not appropriate at the moment.

However, the school had been awarded bronze, silver and gold Modeshift Star awards for its commitment to sustainable travel and was now working towards platinum.

The school said a community use agreement specified restrictions on times of use and lighting and residents’ privacy was protected by obscured glazing on the windows overlooking the nearest homes.

Tours of the school were available for all local residents, subject to guidelines, and details were available on its website. Headteacher Karen Edwards said: “We are thrilled to have finally moved to our permanent site in the heart of the Heights community and are incredibly grateful for all the local support which has ensured this outcome.

“It has been wonderful to witness the majority of our families walking to and from school each day and to see a whole range of local residents making the most of all the improvements to Mapledurham playing fields that our school has enabled.

“We look forward to establishing and strengthening positive relationships with our new neighbours and would encourage any comments or concerns to be emailed so we can work together to make this happen.”

The email address is community@theheightsprimary.co.uk