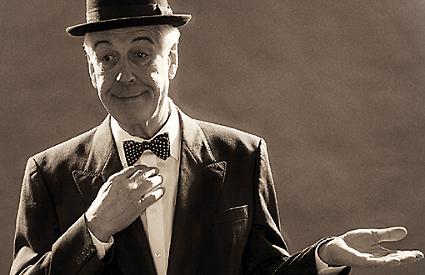 A ONE-MAN show exploring the life and times of the late great comic Stan Laurel comes to the Kenton Theatre at the end of March.

Hi-Di-Hi! actor Jeffrey Holland brings Laurel — the slimmer half of classic comedy double-act Laurel and Hardy — to life in the one-hour matinée show on Saturday, March 29.

And This is My Friend, Mr Laurel follows Laurel as he goes on a visit to the sickbed of an ailing Oliver Hardy. Stan remembers their past successes when they performed together as Laurel and Hardy, their shortcomings, and the women in their lives.

Jeffrey Holland has been performing for the past 40 years. He is best known for his roles in popular TV sitcoms such as Dad’s Army, It Ain’t Half Hot Mum and You Rang M’Lord? His most memorable and loveable role was the one that made him a household name in the Eighties: Spike, the naïve holiday-camp entertainer, in the BBC sitcom Hi-Di-Hi!

Jeffrey also made a name for himself in the world of light entertainment with regular appearances on The Kenny Everett Show, Russ Abbott’s Madhouse and The Les Dennis Laughter Show. He has also had a long and successful career in the theatre, most recently starring as George Findley in Victoria Wood’s critically acclaimed play Talent.