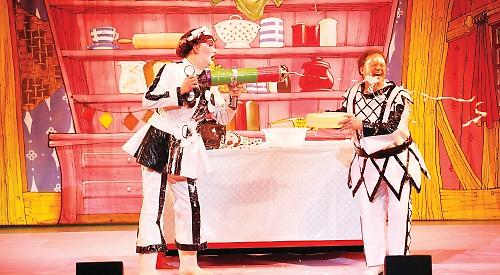 OFF to the Hexagon, where familiar favourites teamed up with talented singers and dancers in a crazy and colourful extravaganza.

Featuring Paul Morse as a jaunty Dame Dolly Mixture — “I say ‘Dolly’, you say ‘Mixture’!” — and a returning Justin Fletcher as Jingles the Jester, much hilarity ensued, with slapstick, misunderstandings and a glorious custard-soaked cake scene.

The audience was enthusiastic from the start and we were all drawn in, with lots of banter (oh yes there was!).

With Katie Cameron as the catty and evil Wicked Queen, Sarah Accomando as Snow White and Karl Loxley as Prince Michael, the storyline was as moving as ever, with lots of boos and hisses for the Wicked Queen as she tried to obliterate her beautiful stepdaughter. The kids all loved Jingles the Jester and Dame Dolly, while Sarah Accomando had a great singing voice and the talented Karl Loxley was a strong and savvy prince.

I thought the colourful, glittering Magic Mirror was a really nice touch, with lots of clever lighting and interaction.

Dame Dolly Mixture’s outfits were fabulously outré with a lot of bottle.

The Seven Dwarves were a sight to behold — little mini-puppets worn by the actors, which with an extra pinch of suspension of disbelief (if you squinted a bit and ignored the wearers) were thoroughly intriguing. My children loved joining in and shouting at the characters on the stage — and the children in the show were inspiring.

The classic Twelve Days of Christmas was performed, involving more flying loo rolls (as also seen at Windsor), a bit of a soaking, various props and the fabulous “bra that could only hold three”.

From the glittery, multicoloured scenery and costumes to the visual gags and nice tunes, this is another fabulous seasonal hit from the good folk at the Hexagon.