Davro has got Buttons sewn up 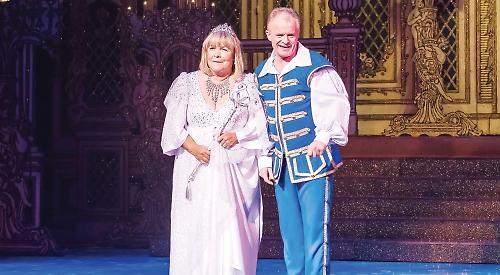 IF you were asked to condense pantomime into two words those words should be “Bobby Davro”.

His Buttons at the Wycombe Swan says everything about the genre: clowning, singing and endless bad gags told with good humour.

Davro has been at this game for 35 years and certainly gives no impression of being bored with it, so neither are we as we delight in his puppy-dog energy and wonderful comic timing.

This is a fairly traditional Cinderella with no Baron Hardup but a likeable Linda Robson as Fairy Godmother Tracey, Ben Stock and Alex Woodhall as bitchy Ugly Sisters, a camp Louie Spence as Dandini and Luke Kelly and Sarah Vaughan as Prince Charming and Cinders.

The song and dance routines are delivered well but unremarkably. It’s the comic routines which stamp this show: Davro dominates them for the most part, but not always. He is so fast, so quick-witted and so determined to entertain that sometimes others struggle to keep up.

There’s a marvellous routine involving a donkey with Prince Charming, Dandini and Buttons which steals the show in the first half and leaves us with a classic punchline.

The action moves quickly, although the story fades in the second half as the routines and songs dominate.

But have no fear, the slipper finds its rightful foot and the wedding takes place.

They are married and live happily ever after. Or, as one Davro line has it, “live in total misery ever after”.