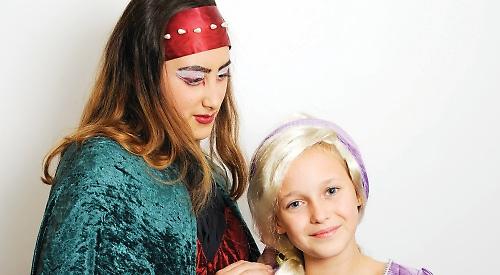 LAST month’s US presidential election has already had a number of unexpected consequences.

On the day of the result itself, Newsweek magazine had to pulp copies of its “Madam President” edition anticipating a Hillary Clinton win.

Meanwhile, here in Henley, a similar editorial change had to be made — albeit safely behind the scenes.

Muffin Hurst is the writer of this year’s Henley Children’s Theatre pantomime, Rapunzel — A Tangled Tale, which is running at the Kenton Theatre in New Street from Friday, December 30, to Saturday, January 7.

Last month she told how she had taken over the writing role from her father, Mike, having for many years collaborated with him as the script editor and director of the group’s pantos.

“I have really enjoyed the challenge of penning my first script,” says Muffin. “I know it doesn’t make me JK Rowling or Zadie Smith, but it’s fun to have used my creative mind a little bit.

“I have been directing children’s shows for approximately 30 years, so I pretty much know the format. I just hope the cast and audience enjoy it too.”

With 120 children aged from four to 15 attending the Henley Children’s Theatre’s Saturday classes at the Sacred Heart Parish Hall in Walton Avenue, Muffin’s version of Rapunzel will be performed by two alternating casts of 60.

In previous years, in her capacity as script editor, she has sought to tailor the drama for the group’s members — something she is now doing as the writer.

The first challenge, says Muffin, was to accommodate the large number of talented young men in the group’s seniors class.

“The script called for more male parts, so the fairy has become Fairy Hairy Styles — fitting perfectly with our hair-themed story,” she says.

As a glance at the synopsis in the Kenton’s autumn-winter season booklet reveals, the character culled to make way for Fairy Hairy Styles was none other than Hairy Fairy Berry.

Rapunzel — A Tangled Tale tells the story of Princess Rapunzel, who is blessed with amazingly long hair. But she is unaware of her regal heritage, having been taken from her parents at birth by the evil Fairy Balding and incarcerated in a tower.

It falls to the principal boy, Bob, the hapless duo Tony and Dai, and the good fairy, Hairy Styles, to navigate the plot to a happy ending — with a little help from the royal hairdresser Dame Bouffante, the glittery Nits, and the Alice Band along the way.

(One of the members of the Alice Band — a rock ’n’ roll chorus line for eight- and nine-year-olds — is Muffin’s eight-year-old son, Woody. “He’s eight. He loves it,” she says.)

With the show’s first public performance — at 1pm on Friday, December 30 — just two weeks away, Muffin understandably doesn’t want to give away any spoilers.

But after making the switch from Fairy Berry to Hairy Styles, Donald Trump’s unexpected election win threw Muffin a scriptwriting curve ball from all the way across the Atlantic.

“I had to rewrite the ending,” she laughs. “I’d anticipated a Clinton victory in the US, and the leader of the Fairy World, Hairily Clinton, came on at the end to remove all evil, etc. This has had to be rewritten, obviously.”

Again, without giving too much away, Muffin’s description of the new character as having “an amazing orange perma-tan and impressive hair to rival Rapunzel” will hopefully suffice.

With rehearsals in progress, it sounds as though it has been a fun ride so far.

“Oh, so much!” says Muffin. “I always get criticised for laughing at my own jokes but, you know, if I’m not laughing at them then I don’t think anyone else is going to. I’ve gone for lots of hair jokes and puns. Maybe too many, I don’t know. It is called Ra-pun-zel, after all...”

l Tickets for Rapunzel — A Tangled Tale are £13.50 with concessions available. For show times and to book, call the Kenton Theatre box office on (01491) 575608 or visit www.kentontheatre.co.uk