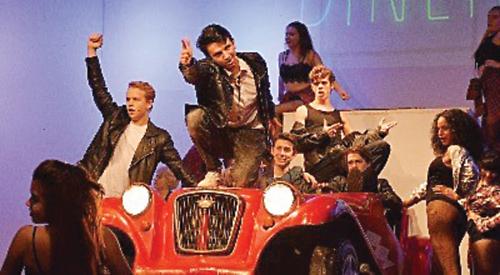 THERE was no shortage of supporters and happy viewers in Rotherfield Hall at The Henley College last week, which was great to see as the students and production team had obviously put a lot of work in.

Grease is such a fun musical — although notably different to the film — with upbeat songs, quick humour and love overcoming everything in the end. What’s not to like? (Although I’m still not convinced I get the moral of the story!)

The crowd certainly showed their enjoyment in their applause and reactions, so instead of praising I shall try to be constructive.

There is some definite talent within this group, but for me the performances of Tallulah Thomas and Christian Gittings stood out.

It felt as though there was a real team spirit, which is needed in a show like this. But I would have liked a little less attitude and a little more soul.

The feisty remarks and harsh comebacks were amusingly brutal, but the audience need to see some vulnerability, some softness, to be able to truly connect with the characters.

And performers must stay true to their characters — don’t react a certain way because it is funny if it doesn’t work for your character.

And with the songs, think about the story you are telling and how you want the song to develop. If you start at broken heartbreak, you have nowhere left to go within the song.

The band were together throughout with good levels but occasionally lacking a bit of pace. Notably the final song sent the audience out with a spring in their step.

As for the dancers, there was some brilliant choreography, a lovely use of space within the hall and real commitment in the team.

A special mention must go to Libby Welsh — she shows the difference between putting your hand somewhere and placing your hand there — there was such elegance and musicality to her movement and it really drew my eye.

In terms of the staging, the set was effective but I found the white lighting quite harsh, so perhaps it needed to be softened a bit.

The lowering floor at the end of Beauty School Dropout was very clever and bringing on a life size car very impressive!

And the costumes were great — setting the tone and working well for each character. I loved all the colours.

Special mention must go to the technical team behind the videos, particularly the horror movie — that was hilarious.

Well done to everyone involved. It’s such a lovely atmosphere at The Henley College shows, with everyone being so encouraging, and even the front of house team were a delight.