Panto fairy's a star in the making 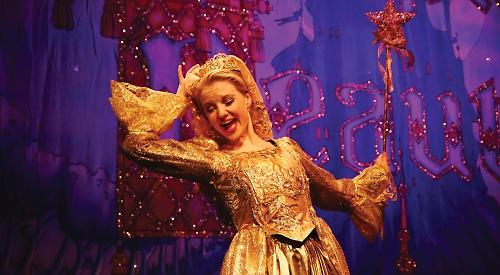 DIFFERENT, divergent, unorthodox, unconventional — I’m not sure what the right word is, but I know that it is in all the right ways.

I love a pantomime but have to admit that the modern trend for big celeb names over trained performers and cheesy pop songs over real content has dampened my panto-loving spirits a bit.

However, Sleeping Beauty at the Kenton Theatre was a breath of fresh air — and it was only the dress rehearsal.

Ian McFarlane has written and directed a fantastic production. Not the story I remember, but definitely one I won’t forget.

Hannah Pritchard was an absolute delight as Princess Bea — short for Beauty — with a pure voice, delightful energy and instant connection with the audience.

She played an untypical princess who is feisty, independent and strong — great to see. She returns to the Kenton after being in Jack and the Beanstalk last year — as does Matt Ian Kelly as Dame Trott and Thomas Ford as Prince Adolopho.

The two princes — Adolpho and his twin brother Felix, played by Kieran Parrott — worked well together representing the narcissistic (Adolpho) and the kind-hearted (Felix).

Adolpho’s introduction went on a little long for me but his stage presence and commitment to his part made him very enjoyable to watch.

Kieran had a gorgeous voice and killer smile that made him the perfect prince to capture the heart of Princess Bea — although part of me wondered whether they may end up more Will and Grace than Will and Kate!

Matt was a naughty but nice Dame. Anyone who can ask an audience member to kiss his ring and thank someone for looking after his box with such innocence and such innuendo deserves much respect. His costumes were fitted well with humour and flair — his nautical outfit was a personal favourite.

Jonathan Vickers took the part of Jasper the Jester and fulfilled every pantomime’s need for doctor, doctor jokes and made a great comedy sidekick to the Dame.

I think children will really warm to him and enjoy responding “Hi Jasper” on his entrances.

As Fairy Light she was amiable and friendly in a stunning golden, sparkly frock. As Fairy Midnight she was fiery and malevolent in various black ensembles — fair play on the various costume changes!

I loved her references to hiring an Uber and being like Donald Trump — a pantomime is not complete without a current reference or two. Annabel was so enjoyable to watch, created two distinct and enjoyable characters, and has a great tone to her voice. My favourite for sure.

The music was a mix of lesser known musical theatre songs and pop songs. When I Grow Up from Matilda worked really well within the plot and Madness’s It Must Be Love gave us the singalong moment.

Musical director Alex Beetschen is obviously very talented and he and Robert Carr on drums worked well in the pit. My only criticism was the pace at some moments, but the musicality was notable.

In true Pretty Woman style, after the prince rescues the princess she rescues him right back and the moral that everyone has to write their own story is such a fantastic one for a modern pantomime.

Children will love it — the colour, the energy, the custard pies. Adults will love it too — the witty one-liners, the modern references and the unashamed innuendo.

I think the Kenton and O&Co Entertainment should be proud and I think you should buy a ticket.