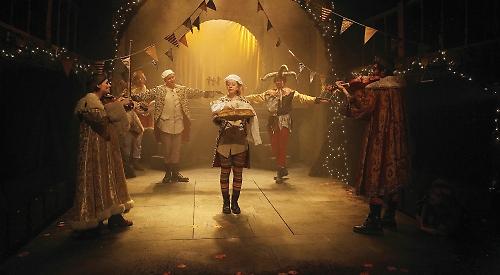 CHRISTMAS is always special at the Watermill — and they’ve brought out the big guns for this production.

Writer Rufus Norris is currently the artistic director of the National Theatre, while director Bill Buckhurst is known for his work at Shakespeare’s Globe Theatre.

Although also a multi-award-winning director, Norris is a writer who really understands the minds of children, judging by the rapt young faces in the audience.

When they weren’t being kept spellbound by the plot, they were laughing their heads off at the antics of fairy Goody (Molly Logan), who had the unfortunate affliction of farting loudly every time she conjured up a spell. For some reason, this went down very well indeed with the young audience.

Logan excels in this pivotal part with a performance that captured everyone’s hearts and took the action along with speed and skill.

This quirky adaptation of a classic tale was superbly told. The play opens with haunting harp music and song in a beautifully lit scene where Fairy Goody establishes herself as our heroine and we find ourselves in a thorny forest with danger lurking in the shape of a fearsome human-eating ogre (Matthew Romain).

The King and Queen are longing for a child, and Goody has the power to make this happen. She grants their wish in a typically hilarious way, but when they upset her she puts the well-known curse on the princess — that she will prick her finger and fall into a long sleep that can only be ended by her being kissed by a prince.

Sure enough, the princess wants a new dress for her 16th birthday, and although her parents had banned all spinning wheels from the kingdom her father relents to grant her wish — and we all know what happens next.

But that basic plot only scratches the surface of this inventive version that is excellent entertainment in every way. The cast is exceptionally strong, and the actor-musicians flit seamlessly from one character to another, providing excellent music, dance, comedy and edge-of-the-seat drama as we find out what happens after the princess falls asleep. Various unsuitable princes appear as candidates for the role of awakener-in-chief (Alex Mugnaioni was hilarious as the Prince of Nerds), but then the successful prince turns out to be the son of an ogress, which rather complicates matters.

This production is full of atmosphere, enhanced enormously by David Gregory and Tarek Merchant’s music.

The clever writing and superb performances by the extremely talented cast must put it right up there among the best that theatre has to offer this Christmas.

You don’t have to be a child to enjoy this production, but take one or two with you if you can — it’s worth it to see them enjoying the farts.