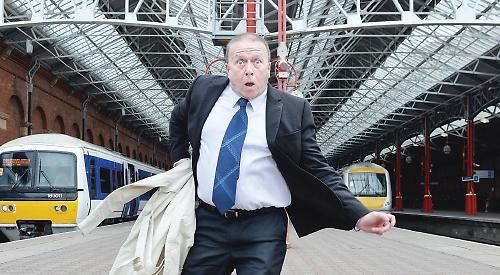 COMEDIAN Steve Gribbin is bringing his tales of “trains and tribulations” to the Norden Centre for the Arts in Maidenhead on Sunday night (January 15).

He will be performing his work-in-progress show Shunted Again! at the Altwood Road venue at 7.30pm.

A highly experienced stand-up comedian, Steve is a guitar-wielding satirist who has made a name for himself on the comedy circuit with his hilarious and razor sharp songs and off-the-wall observations.

He began his career as one half of the political musical comedy duo Skint Video, alongside Brian Mulligan.

Steve is also a veteran train traveller and will be railing against the current state of the British railway system.

He shares tales of his worst journeys, from cancellations and delays to overcrowding.

As well as lamenting the status quo, Steve will be travelling back in history to acknowledge the immense social change that trains have brought — from the adoption of railway time to the movement of goods and the transportation of troops on their way to war.

He will also be sharing the story of his great-grandfather, John Gribbin, a railwayman who was knocked over and killed at Liverpool Lime Street Station in 1932.

Shunted Again! mixes stand-up, songs and train announcements. Join Steve as he journeys from Beeching to Brunel, from steam (H2O) to HS2, and encourages audience members to share their own worst rail journeys.

Billed as a (de)tour de force of cancellations, delays and overcrowding that’s enough to drive you to drive, the show is the antidote to Michael Portillo.