Evening with Brian's a blessing for theatre 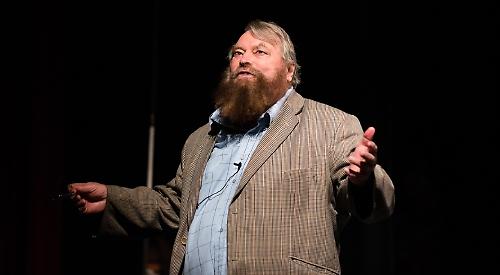 HE’S the star of stage and screen renowned for his larger-than-life roles in everything from Z-Cars and I, Claudius to Star Wars: Episode I — The Phantom Menace and, of course, Flash Gordon.

Ask what Brian Blessed will be best remembered for and his turn as Prince Vultan in the 1980 space opera — which he helped turn into a cult classic with lines like “Gordon’s alive?!” and “Dive!” — will always be near the top of the list.

But with a career as an actor, author, explorer and mountaineer that stretches back more than half a century, the 80-year-old has almost too many highlights to choose from.

Thankfully, the man himself will be on hand later this month to furnish a quick reminder of his many and splendid exploits when he brings his one-man show, An Evening with Brian Blessed, to the Mill at Sonning.

The show takes place on Sunday, January 22, at the 215-seat dinner theatre in Sonning Eye. Dinner is served from 6.15pm and the performance starts at 8.15pm.

A spokesman for the venue said: “We are delighted that the amazing Brian Blessed has offered to perform a one-man show here. He is not taking a fee for the evening and all proceeds are being generously donated to the Mill — our technicians are desperate for a new lighting rig!

“Put this date in your diary and don’t miss your chance to ask the indomitable Brian questions about his distinguished and varied career.

“He is a seasoned West End performer and his theatre work includes being Old Deuteronomy in the original production of Andrew Lloyd Webber’s Cats. For many years he has been a stalwart figure at both the National Theatre and Royal Shakespeare Company.

“Brian is also an explorer, going on three expeditions to Mount Everest. He has conquered Mount Aconcagua in Argentina and Mount Kilimanjaro in Tanzania. He is the oldest man to reach the magnetic North Pole and has completed 800 hours of space training in Moscow.

“He recently published a memoir, Absolute Pandemonium, and last summer was awarded an OBE.”

Blessed’s appearance at the Mill was first announced in July — with the date being confirmed in August.

At the time he was in the middle of directing an eight-week run of Agatha Christie’s The Hollow — his first time as a director since staging one of the earliest productions of Harold Pinter’s 1957 play The Room.

Having cut his teeth as an actor in rep, he said his desire to return to that artistic milieu had led to his working at the Mill at Sonning following talks with managing director Sally Hughes.

“Well, you know, I miss rep — repertory theatre. Patrick Stewart and I used to go to the Sheffield Rep and see all the lovely productions there, with wonderful sets. When I left drama school I was at Nottingham Rep, on four pounds a week, then went to live in France and then went to Birmingham Rep. Worked with people like Paul Schofield. I was playing leads there when I was 22.

“I just miss the repertory theatre and the Mill at Sonning has a wonderful feeling of pure theatre. I mean, Sally Hughes — I think it’s a miraculous place, a miraculous woman — she’s restyled it and constructed it.”

He added: “I’ve thought for a long time — I’ve been there on couple of occasions and I just think it’s
Shangri-La. I think the Mill at Sonning — it’s everything that I love about theatre.

“I mean, the river’s wonderful there, the atmosphere, the bar, the restaurant. People are given a meal before the show and then at half-time they’re given coffee. It is so beautiful and civilised and heavenly. It’s a heavenly place! It’s a lovely stage and a lovely atmosphere.”

Blessed also flagged up the Mill’s uniqueness as a dinner theatre, saying: “There’s no other place that does it. And somehow the audience there feel part of it. And of course in the auditorium they’re actually sitting on the stage, so they’re one foot or one yard from the actors.

“It’s such an original place. Its staff are so professional — they’re so brilliant.”

Confirmation of the Mill’s special status came as recently as October, when it was named the most welcoming theatre in Britain.

It had been shortlisted for the accolade after winning the South East title in the UK Theatre Awards, which are voted for by the public.

With an eye to the future, the start of September had seen the launch of a new members’ club, the Friends of the Mill, the aim of which is to help fund the theatre’s continued renovation and refurbishment.

l Tickets for An Evening with Brian Blessed are £80 and include a two-course meal. To book, call 0118 969 8000 or visit www.millatsonning.com