'Cult' musical still knows how to get audience partying away 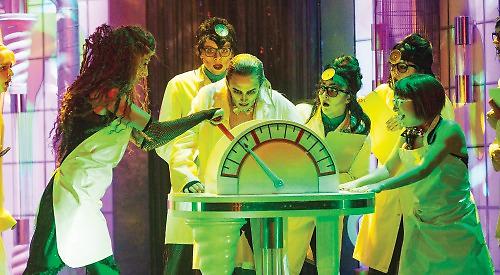 IT’S party time at The New Theatre, Oxford, with its show of choice for the festive season being Richard O’Brien’s The Rocky Horror Show — the musical that has become something of a cult phenomenon since it burst on to the stage of the Royal Court Theatre back in 1973.

It has become traditional that audiences dress up in all variations of basques and fishnet tights to enjoy the show, and it could be said that there is almost as much entertainment going on in the audience as on the stage — as heckling and dancing along are actively encouraged.

So you will understand that there is nothing of a white Christmas here, rather a red and black Christmas with a little blue thrown in for good measure.

But the fun and energy in this production, directed by Christopher Luscombe, overcomes any reservations you may have about the rather tenuous and clichéd plot — and you can settle back to enjoy wonderful performances from a very strong cast led by Liam Tamne as Frank-N-Furter.

He turns out to be a space alien who, in a nod to Mary Shelley’s Frankenstein, has created Rocky, a rather remarkable creature athletically played by Dominic Andersen. The newly-engaged Janet and Brad (Sophie Linder-Lee and Richard Meek) gained our sympathy right from the word go when their car broke down and they took refuge in an isolated and sinister castle.

But from the moment they were greeted by the creepy servant Riff Raff (Kristian Lavercombe) you knew that everything was going to get very weird very quickly.

However, all the action is heavily tinged with humour, culminating in a very funny bedroom scene with the bed thoughtfully arranged vertically so we could see every bit of the ‘action’ — so the weirdness really doesn’t matter at all.

There is a good sprinkling of well-known faces among the excellent cast. You will recognise Georgia May Foote from Coronation Street and Strictly Come Dancing, and the part of the narrator is shared during the run by Norman Pace (Hale and Pace), Charlie Condou from Coronation Street, and comedian Steve Punt.

This reviewer saw Norman Pace making the most of every opportunity for fun with the hecklers — turning a bungled entry to his advantage with skill and bringing a great reaction from the audience.

This is a very lively, raunchy and fun production which has more than stood the test of time. You need to know what you are getting yourself into, and this show won’t be to everyone’s taste, but if you enjoy great rock music and having fun then a good time will be had by all.