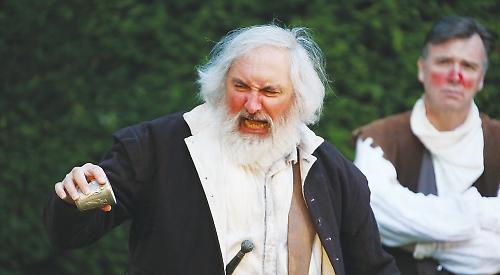 THE new year is not yet upon us, but one theatre company is already dreaming of 2017’s midsummer nights.

The Garden Players from Maidenhead are staging a new production of William Shakespeare’s A Midsummer Night’s Dream at Stubbings House from Tuesday, June 20, to Saturday, June 24.

The dates and the venue are set — but the cast for the celebrated comedy has yet to be determined.

This week the Garden Players announced two nights of open auditions to which all are welcome.

A week later, again at 7.45pm, the venue is St Dunstan’s Church hall, Bourne End, SL8 5AR — the entrance to which is in the community centre car park.

“The company was initially comprised of experienced performers drawn from local societies within the Thames Valley area. We have an exciting programme of events lined up and would be delighted to hear from anyone interested in joining us either on stage or in a variety of other important areas.”

The synopsis for the production reads: “If you go down to the woods tonight, what big surprises will await you? Mischievous fairies and star-crossed lovers, comic labourers, an ass-headed monster and a hungry lion all play their part in ensuring that the course of true love never does run smooth. This magical tale of enchantment ranks amongst Shakespeare’s finest.”

The Garden Players were last seen at Stubbings House in June 2015, when they staged Henry IV Part 1. The Standard’s reviewer, Anna Smith, wrote: “From the opening lines Falstaff was played brilliantly by Graham Weeks, being believable and funny.”

Mr McAdam confirmed that the proceeds from A Midsummer Night’s Dream will be donated to Child Bereavement UK.

He added: “I am delighted that we have been invited to return to the glorious venue of Stubbings House. Our successful production of Amadeus earlier this year brought the total raised over the last eight years to £78,000 for our nominated charities.”

Showtime is 7.30pm each night, but the lawns of Stubbings House will be open for picnics from 5.30pm.