Panto's Pied Piper will quickly have you dancing to her tune 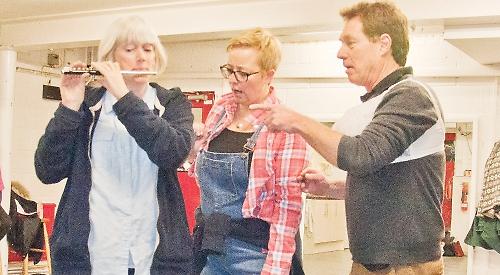 HE’LL sniff out any rat, he’ll have them dancing to his tune, but if you don’t pay him then woe betide you. He’s the Pied Piper of Hamelin and he means what he says.

The Pied Piper is one of the great fairy stories but not often performed in pantomime.

So the Corn Exchange in Wallingford is breaking new ground with its production of Alan P Frayn’s witty and lively script this January.

Musician Sue Huntingford-Ledger takes the title role. Sue normally directs the music from the pit for the rest of the cast in the Corn Exchange panto, but this time she takes centre stage with her piccolo.

“I love this idea,” she says. “I can improvise on the piccolo and have a really nice time. I love this role — it suits me really well.”

One of the reasons The Pied Piper is rarely performed, especially by non-professional groups, is because it’s hard to find actor-musicians capable of taking on the role.

So Sue’s virtuosity on wind instruments as well as her
all-round musical ability means the Sinodun Players, who are producing the show, can come up with something new and fresh.

But it’s still pantomime and all the favourites will still be there — oh yes they will! — including Fiona Huntingford-Ledger, a firm favourite at the Corn Exchange.

She will be playing the idiot, as usual — this time in the role of Willy, Dame Helga’s daft son.

Fiona’s annual turn as the fool goes down riotously with the audience — although it disguises her other (considerable) acting and singing talents.

Other experienced panto hands include Rebecca Cleverley as one half of a clowning duo with Mark Wilkin, Will Lidbetter as Chief Rat, Keith Yapp as the Burgomeister, and Ric Harley as the wicked witch, Saur Kraut. The Corn Exchange panto regularly wins awards for its spectacular January shows.

This year it runs from Friday, January 13, to Saturday, January 28 — though there are no performances on Sunday or Monday.

Adult tickets are priced £10 on Tuesdays, Wednesdays and Thursdays and £12 on Fridays and Saturdays. Tickets for under-16s are £6.

To view a YouTube trailer for The Pied Piper, go to Mike Rowbottom’s channel and click on “Pied Piper”. Weblink: https://youtu.be/
Tq8FfLa2sbY