Actress and theatre chief with the warmest welcome 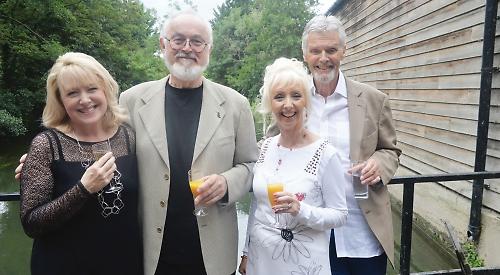 SALLY HUGHES has loved the stage since she was a young girl.

She and her sister would make toy theatres, where they would put on plays to entertain themselves.

The bug certainly bit and, 50 years later, she can look back at a career as an actress, artistic director and now managing director at the Mill at Sonning.

And that’s not to mention her first marriage to an actor and her second to a director.

Mrs Hughes worked in London and New York before becoming artistic director at the Mill, the riverside dinner theatre in the pretty village where George Clooney now lives next door, 32 years ago.

The Mill was founded by her parents who bought the derelict old flour mill in 1977 and converted it into a theatre which opened in 1982.

But it was years before that the young Sally’s interest in acting was first sparked.

She was conceived in South America, where her father Tim Richards, a civil engineer, was working.

Her mother Eileen travelled back to the UK to give birth before mother and daughter returned to Venezuela when Sally was just two months old to rejoin Mr Richards and the couple’s other two children.

Mrs Hughes recalls: “It was a different way of life with no TV and no radio, so we had to entertain ourselves.

“My sister Jane and I used to build toy theatres and we would put on shows. She is a wonderful artist and would write little plays and that’s how we would entertain ourselves. We didn’t have many other kids to play with. It was great as far as I was concerned.”

The family moved to Argentina before returning to England a few years later.

She found her artistic side was reignited in spite of the headmistress Mademoiselle Blonay, who believed acting was “a waste of a good brain”.

Mrs Hughes explains: “She was a Swiss-French woman and at lunchtimes we would all have to speak French. She didn’t approve of drama but she did approve of elocution.

“I would talk very fast so I started having elocution lessons with Rita Melene, who had been an actress but then taught drama at the school.

“I had lessons with her at break times and soon she gave me pieces of Shakespeare and suggested I should become an actress. She fired my enthusiasm — she was an amazing woman.”

When she was 15 Sally moved to Windsor College, where she began to seriously consider a career in drama and then successfully applied to drama school despite being two years under the minimum age of 18.

“My mother said why not lie about my age,” says Mrs Hughes. “She had done that when she applied for the Women’s Auxiliary Air Force.

“She had been a Bomber Command driver during the Second World War and she would appear at concert parties — she had a lovely singing voice.

She attended the Webber Douglas Academy of Dramatic Art in London for three years, moving to the capital in her second year.

Mrs Hughes says: “It was a great school. It was also eye-opening living in London in the Seventies but great fun.”

Fresh out of drama school, her first job was in a play called Coming of Age in which she played several female characters as well as working as an assistant stage manager.

This led to her first encounter with Sonning as the production toured churches across the South-East.

Mrs Hughes says: “We did London first but the first venue when we came out was a church in this little place that I had never heard of. We performed one night and met the vicar and his wife.”

Her second job was in a play about communism in America called Are You Now or Have You Ever Been… at the Bush Theatre in London, where the artistic director was the son of the vicar of Sonning.

“It was great,” recalls Mrs Hughes. “When you first leave drama school you feel you can conquer the world.

“Of course, there were lots of other jobs in between. I worked in a Chappell music store selling sheet music. I would also do little bits on TV and in commercials.”

It was during the play’s run at the Bush that Sally met and fell in love with a young American actor called Mark Rolston. The couple were married and moved to New York in 1981.

“We lived at the top of a house on the Upper West Side,” says Mrs Hughes. “It was really exciting for two young actors. It was great, especially for me.

“It was the year that Prince Charles and Diana got married but we had no TV so I rushed across town to someone who had one.”

The couple’s son Adam arrived and Mrs Hughes balanced childcare with small jobs in theatres or shops while her husband was on tour with the New York Shakespeare Company.

The family returned to the UK shortly after the Mill opened and Mrs Hughes became artistic director at the theatre, succeeding the actor Peter Egan, who is best known for his role as the smooth neighbour Paul Ryman in Eighties sitcom Ever Decreasing Circles.

Then Rolston landed the role of Pte Mark Drake in Aliens, the 1986 sequel to sci-fi blockbuster Alien (1979).

Mrs Hughes says: “We both went to LA for the premiere. It was the whole red carpet deal — there was a big limo to pick us up and we were there with Arnold Schwarzenegger. It was very exciting.

“We were going to stay out in LA but I came back here to work in a BBC sitcom called Late Expectations.”

The pressure of their long-distance relationship was too much for the couple and they separated in 1987.

Mrs Hughes stayed in London with Adam, relying on small parts on TV and in commercials as well as working at the Mill.

She recalls: “I had Adam so couldn’t really work as an actress or go on off on tour.

“I was working at the Mill and commuting back and forth until one night I thought ‘this is ridiculous’, so I sold up in London and moved to Sonning in 1991.”

After the hustle and bustle of London, it seemed very quiet in the village.

“I couldn’t get used to it at all,” she says. “I didn’t like it at first but it was a great environment for Adam. He had his grandparents here and he would come home from school and sit in rehearsals.

“In the end it was wonderful and a lovely time as it’s idyllic.”

In 1994 she met Alvin Rakoff, a Canadian director. She shared an agent, Sandy Ross-Brown, with his late wife Jacqueline Hill, a Doctor Who actress who had died the previous year.

Mrs Hughes says: “Sandy decided to bring him down to the Mill. We met and fell in love.”

The couple did not get married until three years ago, although they have collaborated on several plays at the Mill. These included A Sentimental Journey, a play about Doris Day’s life in which Mrs Hughes played the lead role.

“It went to Europe and LA and had standing ovations,” she says.

The play was written by her son, marking the start of his own career in showbusiness.

Adam went on to produce the film A Street Cat Named Bob, which was released last year.

Mrs Hughes attended the London premiere with her son, where he was introduced to the Duchess of Cambridge.

“The premiere was amazing,” she says. “I saw Adam in the line-up meeting the Duchess.

“After the first week the film was fourth in the box office, just behind The Accountant with Ben Affleck. That was amazing and I’m so proud of him.”

Meanwhile, the Mill has gone from strength to strength under her direction, hosting stars including Dame Judi Dench and Brian Blessed.

Mrs Hughes says: “With actors it’s always the play that attracts them but it might be one that they wouldn’t be able to do in the West End.

“One of my highlights was when Alvin directed Separate Tables with Anthony Valentine. People say it was one of the best shows they’ve seen and I agree — it was wonderful.”

When the Mill opened, the idea of dinner theatre, where a meal is included in the price of a ticket, was an unusual concept but it has proved popular.

Indeed, only last year it was voted the most welcoming theatre in the country.

However, two years ago, she did think about selling after the floods. Although the bar at the theatre was flooded, it was actually the prolonged closure of the Playhatch road outside that was most damaging.

Mrs Hughes says: “We had survived the recession but it had been really tough and it was difficult to know how to take the business forward. I thought maybe it was time to sell, maybe it had had its day.

“But I met my accountant and we ended up talking about how to refresh it. I met a few specialists in food and marketing and decided to emulate my parents all those years ago.

“It was about going for it, leaping into the dark and giving it a new lease of life all-year round. It’s paying off and sales have doubled in the last year.

“We have all sorts of different things now such as children’s story times, the new bar and book clubs. It’s making the building work at all times, not just at night.”