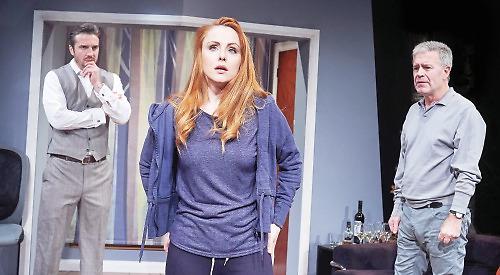 With 13 books in the series to date — and 18 million copies sold worldwide — the character is approaching the kind of stature enjoyed by Ian Rankin’s Detective Inspector John Rebus.

But while Rebus has been extensively adapted for television and radio, the Roy Grace novels are only now starting to make their way into theatres the length and breadth of the country, thanks to Shaun McKenna’s pitch-perfect adaptations.

In 2014 his reworking of James’s 2010 novella The Perfect Murder toured the UK, including a six-night run at the Wycombe Swan.

Then in January last year a new production of the same play directed by Keith Myers enjoyed a seven-week run at the Mill at Sonning.

Among other things, The Perfect Murder was the story of the young Detective Roy Grace’s first homicide investigation.

Now the character and the team behind last year’s hit show are back at the Sonning Eye venue with Dead Simple — McKenna’s adaptation of James’s 2005 novel which was the first in the Roy Grace series.

The show opened last night (Thursday) and runs until Saturday, March 11. It will be reviewed in next week’s Henley Standard.Te signs are good, though, with a third Roy Grace stage adaptation — of 2007’s Not Dead Enough — already in the works.

Dead Simple tells the story of Michael Harrison. He has it all — good looks, charm, a successful career — and to top it all he is about to marry the most beautiful girl in the world.

But when Michael’s friends decide to pull the ultimate wedding prank, the groom-to-be finds himself buried alive in remote woodlands with absolutely no way of getting out.

But the joke backfires. The friends are involved in a car crash. Who is going to release Michael? No one knows he is there!

Grace begins to fear that Michael’s chances of survival are slim. And getting slimmer and slimmer with each passing moment...

A spokesman for the Mill at Sonning said: “Following on from the success of The Perfect Murder, the Mill is delighted to produce another edge-of-the-seat thriller by bestselling UK crime author Peter James. Certain to jangle the nerves, Dead Simple is nail-biting drama from beginning to end. Book your tickets today — if you dare!”