Thrills, chills and twists in a seriously comic tale 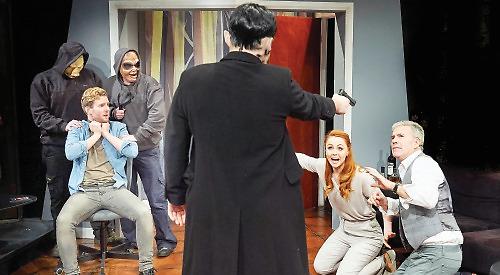 A START to freeze the vitals followed by a string of butt-clenching incidents — Dead Simple has more twists than an Alpine road and quite a few characters go over the edge before the end of this enjoyable murder-mystery.

The Mill at Sonning has taken on a second adaptation of a Peter James novel which manages to be comic and serious at the same time. It’s a complicated story, but always exciting and followable.

It’s Michael Harrison’s stag night and his old chums get their own back on him for past misdemeanours by putting him in a screwed down coffin covered over with corrugated iron in an isolated wood.

So far, so terrifying!

They go off to a club for a couple of hours. But their transit van crashes on the way and they’re all killed, leaving poor Michael trapped in the coffin with no one knowing where he is. Makes you go cold, doesn’t it?

A really good start then, and everyone feels queasy at the thought. To reveal any more would give away the story but look out for treachery, greed and opportunism.

Can we trust any of the characters to be who we think they are? Yes, thankfully, the doughty Detective Superintendent Roy Grace and his sidekick Detective Sargeant Glenn Branson — they’re the good guys and doggedly go about sorting all this out.

The comic value comes in the probability that any of this might happen — highly unlikely but not impossible.

Every twist and development could happen and director Keith Myers makes sure it’s all played dead straight. The actors transmit no irony or knowingness, so we can believe it — at least for the two and a half hours of the show.

One of the complaints about novel adaptations for the stage and film is that they strip things down too much and leave out what makes the story so compelling. Shaun McKenna has tried to avoid that with his reworking so that all the character traits, nuances and triple-plot layers remain.

The pace is helped by a clever and effective set design from Alex Marker which delivers three locations simultaneously without crowding the Mill’s space.

The result is that everything is there if you’re prepared to look. There are no sudden surprises — the many twists are discreetly signalled so that you get them a microsecond before they’re revealed. That way we enjoy the shock value and pat ourselves on the back at the same time.

Afterwards we can return to reality and reassure ourselves that it would never happen — but it could.