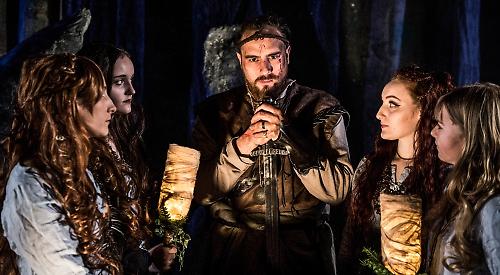 HAVING previously enjoyed lots of lighter fare from director Joe Malyan, such as The Borrowers, Peter Pan and The Magic Finger, we steeled ourselves for tensions, melancholy, tragedy and tyranny as he brought us Shakespeare’s infamous and savage “Scottish play”, with its notoriety and superstition.

To a full house and a total hush from the spellbound audience, this production certainly delivered.

This classic tale, where a loving couple are on a path to self-destruction via ruthless political ambition, was presented here with a clever methodology.

This was so powerful that if it was available I’d probably download the soundtrack, and the music followed me around in my head for days.

There seemed to be will-o’-the-wisps floating on stage and immersing us in the spirit of the show, with fluid, whispery movements and dainty choreography.

So the three witches, the Weird Sisters, plus daughter, became waif-like spirits of nature, the director purposely stepping away from their traditional depiction as cackling bearded women.

Their singing voices were a treat, Heather Wilson and Amy Wilding leading the way in bringing us these heartfelt melodies.

Victoria Spearing’s stage set enhanced this, harnessing the elements of fire and water and being made up of movable Celtic standing stones, with various runes and symbols carved into them.

This could so easily have gone a bit Spinal Tap, but managed to avoid this as they were so well-crafted and became a clever device, acting as mini-screens, where the set could be tweaked and shaped as the witches swayed around.

With pools, fire pits, tablets for lying on and seats, these stones worked wonders.

Their lives fall apart on stage as the prophecy of the witches is fulfilled.

Max’s powerful depiction of the king being driven mad by his own tyranny and its consequences was complemented by Laura’s terse, brittle and highly strung Lady Macbeth urging him on his way to wrongdoing and realising what they have done.

As the bloody politics played out, the entire ensemble pulled together and had the stamina and talent to bring us the intrigue of the story.

We all knew this wouldn’t end happily and there were many moments of heartbreak and tragedy.

However, the meaningful music and the strength and dedication of the cast gave it a sweeping beauty.

The death scenes were, ahem, brilliantly executed, and I was on the edge of my seat with health and safety concerns during the sword-fighting finale.

Anne Thomson’s costumes and hairstyles played vital supporting roles. I loved the witches’ two-tone tie-dye dresses, while the women had long locks and Macbeth sported a sort of gentle mohican.

This was beautiful and melancholic fare, and while it presented us with the meat and bones of the story, it was also infused with a lot of soul.