Thriller is worth strapping yourself in for 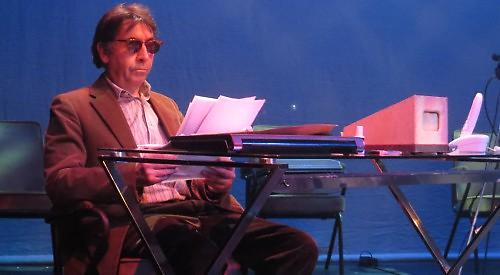 A FULL house turned out to enjoy this taut psychological thriller, written by Simon Williams and directed and designed by Patric Kearns.

There was an audacious use of a live camera feed and pre-recorded sound effects throughout, which had a very good success rate, as goings-on were simultaneously projected on to a background screen or broadcast over speakers.

Actress Zoe Lang agrees to attend an unusual improvisation workshop, one for which she is to be paid and which involves speaking direct to a camera.

She meets Bernard and Brocklebank, who are running this workshop, which appears to have wider implications involving Zoe’s safety.

However, Zoe has a painful past, which has given her a vulnerability yet also the fortitude to ensure that no one can ever hurt her again. She also seems highly adept at out-psyching everyone else...

A serial killer known as “The Surgeon” is also at large, for which Zoe could be about to serve a useful purpose, and there may be more than one case of hidden identity.

The use of the Nine Inch Nails song Hurt at the very start was a good indication of where this was going, as Zoe was invited to portray down-and-out Natasha Campion in an attempt to flush out the murderer.

Her tussles with the balaclava-clad stalker of women proved insightful and almost cathartic.

There were acerbic comments and biting banter between the antsy Brocklebank and the mysterious Bernard, always wearing sunglasses and prone to quoting Latinisms and platitudes.

A smart set with red lampshades and blue lighting helped create an eerie undertone as we delved into the mind of a killer and explored the twists and turns of fate. There were quite a few jump-out-of-your-seat moments, with shrill telephones and other sounds ringing out, while William Blake’s classic poem The Tyger was used to haunting effect.

Ultimately Zoe’s sheer ability to read the situation shone through, like a beacon of hope amid the madness.