Zany musical comedy deserves to rise to the heights of success 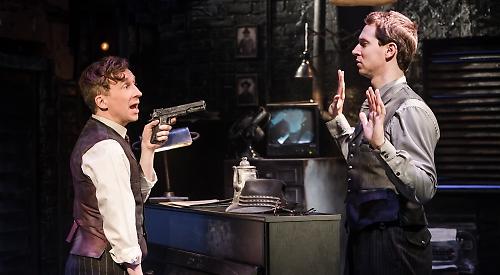 THE Watermill Theatre at Bagnor is kicking off its 50th anniversary year in very impressive style with Murder for Two — an award-winning collaboration between two young American writers who discovered they had a mutual passion for Agatha Christie and the Marx Brothers.

And now it is receiving its UK premiere at the Watermill, directed by Luke Sheppard.

But who do you get to turn a quirky, whacky and, it has to be said, rather silly plot into a work of genius?

The answer is RADA-trained superstar-in-the-making Jeremy Legat, closely followed by his co-star Ed MacArthur, who between them play all 12 suspects and the investigating police officer with utter brilliance.

Both actor-musicians appeared to be absolutely at the top of their game, with Legat apparently effortlessly flitting between a range of characters encompassing all the suspects.

And the writers have provided a fine selection that includes the victim’s widow, a prima ballerina, a psychiatrist, a failed actress, a bickering couple and three nine-year-old boys — all showcasing Legat’s considerable talents to the full.

MacArthur as the hapless policeman provides the perfect foil for the energetic antics of all the suspects.

His opening number, Protocol Says, got the show off to a superb start, while some of the duets between the pair provided little gems among the more obvious musical numbers.

This is an immensely clever show that is extremely entertaining on all levels. Great music (and dance), huge pace, ridiculous comedy (echoing the Marx Brothers’ influence), and a good old twist in the tail of the tale make for a wonderful evening.

Writer Joe Kinosian has appeared in the show on and off since it began and it could not have been easy to hand his creation over to someone else. But in Jeremy Legat it is in very safe hands and deserves to rise to the heights.

Murder for Two runs at the Watermill until Saturday, February 25, and then transfers to The Other Palace studio, London, SW1E 5JA.