'Schmucking about' is comedian's cup of tea 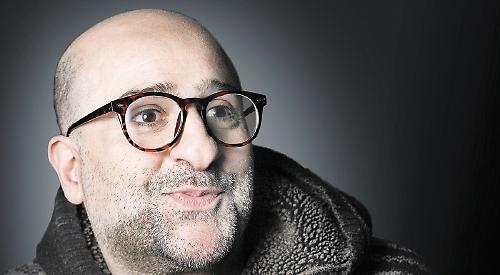 Award-winning comedian and actor Omid Djalili is coming to the end of a huge 108-date UK tour, but he has saved the best for last with appearances at the Reading Hexagon and Wycombe Swan in March and April. He told BEN WILLIAMS about keeping his mind sharp, being shot by a Rolling Stone, and reading the 2.6 million-word Chilcot report in its entirety

OMID Djalili might now be known to millions for his roles in Hollywood blockbusters and West End appearances, but he started his career in fringe theatre, moving on to the theatres of Central and Eastern Europe in the early Nineties, and then the alternative comedy circuit.

And while he’s swapped dingy pub rooms for the big theatres, it’s still live on stage doing stand-up where he’s at his best.

His new show is called “Schmuck for a Night”, and we may as well start by asking why.

“I like the word ‘schmuck’,” he says. “It means ‘fool’ or ‘buffoon’. You have to be a schmuck to do comedy in today’s climate. I’m embracing the schmuck in me to take on the big issues of our day. Plus, it’s a word that ends with ‘uck’, which can only be a good thing.”

Critics have noted that the show is “mellower” than Djalili’s previous tours. Is that fair to say?

“I’ve become less frenetic. I used to dance every two minutes in between the stand-up. I can’t even remember why. It was mentioned to me that when I danced audiences were laughing at me not with me. So it was either stop dancing or ban my manager from the gigs.”

Some audiences might be disappointed by the relative lack of dancing — Djalili answers “Yes” when I ask him if they are — but to make up for it the show touches on Brexit, ISIS and Donald Trump. Given that it’s such a long tour, is the show likely to alter as it goes along?

“Well, I think the show will change even while I’m on stage. It’ll be so current sometimes audiences won’t laugh until they get home and turn on the TV.”

Support on the Schmuck for a Night tour comes from the comedian, singer-songwriter and playwright Boothby Graffoe, with whom Djalili has collaborated before.

At last year’s Edinburgh Festival Fringe they produced a show known as the “Iraq Out & Loud” project, which involved reading the Chilcot report in full, 24 hours a day. How did the idea come about?

“I was on the phone to Boothby in July when I said, ‘We should do a show at next year’s Edinburgh Festival where we just read the Chilcot report 24 hours a day.’

“He mentioned it to a promoter called Bob Slayer and rang me back and said, ‘There’s a guy called Bob who’s mad enough to do it this year.’

“So while Bob was building a shed to stage it in, we were contacting all our friends in comedy to read it and kick the idea off. It took 285 hours and 1,444 people to read it. I read too. It was a truly one-off experience.”

The judges of the Edinburgh Comedy Awards awarded the show their Panel Prize, something that clearly touched Djalili.

“At my age, winning an award? What a pleasant surprise. Though, I’ve found when an idea is really good it’s no longer your idea. The idea belongs to the collaborators. In fact, the idea felt like it belonged to the comedy industry.

“Comics do nutty things all the time at the festival. Sometimes it’s a 24-hour show, sometimes mad benefit gigs, but sometimes an idea really captures the zeitgeist.

“Comedians are very adept at smelling BS — by which I mean sensing when we’re being fobbed off — so it was important to us that the readings were a simple non-political people-powered public service.”

Were there many laughs to be had in the context of such a serious report? Surprisingly, perhaps, the answer is yes.

Away from his stage career, Djalili is the executive producer of a documentary called We Are Many, about the 2003 protests again the war in Iraq. Is he proud of the film?

“It’s not a comedy but you could easily say it’s my crowning achievement so far. I’ve worked on the project for the last five years, countless edits, screenings, meetings, discussions... the fact that Universal Pictures bought it, that it’s been so well received and hit number one on iTunes in about 10 different countries, you could say I’m very proud of it. A film promoting worldwide public opinion as a ‘second superpower’ has got to be doing good.”

Does he think the film and the Chilcot report reading will make a difference to our politics?

“You can never quantify the impact of such things, but certainly it felt like they were important projects to be part of. In this life you’re either a problem or a solution. I’d like to think these projects — which raise more questions than answers — are firmly entrenched in the solution camp. Or at least trying to be!”

Some people might be surprised to learn about the film and the festival reading, as Djalili’s stand-up isn’t regarded as particularly political or agenda-based.

On the acting side of things, Djalili continues to win film roles. Having been cast in The Nutcracker with Morgan Freeman and Keira Knightley he has been combining filming with his stand-up tour — and not for the first time.

“You’d think it would be weird but it has never fazed me. Once in Barnet years ago I was late so didn’t change and came straight to the theatre from the set of The Mummy at Shepperton Studios and walked straight on stage in my film costume. I went on stage in full Thirties Egyptian prison warden garb. I even heard a crowd member say, ‘Well at least he’s making an effort.’ ”

Djalili’s movie CV has seen him work with the likes of Russell Crowe, Brad Pitt, Robert Redford, Johnny Depp, Mike Myers, Sarah Jessica Parker. But who’s been the most fun? “That’s a tough one. I’d say, and anyone who’s worked with him as an actor would agree, Keith Richards from the Rolling Stones was probably the most extraordinary.

“He played the father of Captain Jack Sparrow in Pirates of the Caribbean: At World’s End. His character shoots and kills my character for no reason. This seemed to bother him.

“In fact, he shot me about 14 times and after each take he’d come up to me and say, ‘Listen, you do know I don’t mean this?’ After every take. It was almost like a joke but it wasn’t. Bang! and he’d shuffle up and say, ‘Nothing personal mate, I hope you realise.’

“Then after another take, with the same sincerity and intensity, ‘It’s all acting. You know that. You’re not upset with me, are you?’ Once he shot me and just said, ‘Forgive them Lord, they know not what they do.’

“The final time he shot me he just stood over me and mumbled, ‘We’ve all got issues... it’s all about Mummy innit?’ How right he was.”

The tour concludes at the Hammersmith Apollo on Saturday, May 20. For more information and a full list of dates, visit www.omiddjalili.com