Harpist who fills in the sound of silent movies 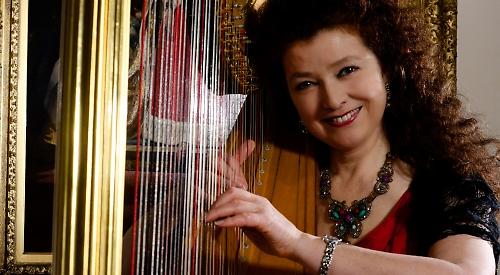 ELIZABETH-JANE BALDRY is the world’s only silent movie harpist.

She will be providing the soundtrack to Speedy, the 1928 comedy starring Harold Lloyd, at the Kenton Theatre in Henley next Saturday (March 4).

Elizabeth provides live accompaniment to cinema screenings of early film around the world and has performed sold-out shows in the US, Italy and France.

Her compositions have been used in film and television, including more than 50 episodes of children’s series Bernard’s Watch on ITV.

She gives about 80 performances a year, from recitals in historic houses or in specialist art cruises to weddings and funerals, and has been nominated and won awards.

He’s wildly in love with a pretty girl called Jane but Jane’s beloved grandfather is in trouble – he runs the last horse-drawn tram in the city, and an unscrupulous railway magnate desperately wants the route.

Elizabeth, who studied at the Royal College of Music, explains: “What I will be doing is providing the entire atmosphere and score using the harp.

“It is quite a specialist art as it is usually done with a piano. With the harp you can add depth and put bits of real emotion in.”

Elizabeth composed the soundtrack herself and says her job is to add to the story rather than provide a running commentary.

“It is really a matter of choosing what you are going to go for and bring out in the film,” she says. “The most important thing is to support the story.

“When a character is introduced you can point them out with music so that the audience clocks that person so they know they need to remember them as they could be important. That kind of thing is very important. You can’t have a baddie coming onto the screen and play something like circus music or you would really mess it up and confuse the audience.

“For another film, the 1924 version of Peter Pan, you could perform the whole thing in a whimsical way but it is much deeper than that. You can work with the themes of loss of innocence and childhood death and that is much more entertaining for the audience.”

Elizabeth, who has also produced scores for other silent films such as Nosferatu, Phantom of the Opera and Sunrise, says it doesn’t take long for audiences to get used to watching a silent film.

“For most people it takes about 10 minutes to clock in,” she said. “You then start filling in all the sounds the same way you read a book and picture what you are reading.

“When you start to absorb what you are seeing and hearing you will be able to imagine how the sounds fit together. It is quite extraordinary.”

Elizabeth says working with the harp for a live film score is challenging.

“You have to concentrate really hard and remember so many things,” she said. “With the piano it is easy to do a bang or a crash quickly, on a harp you have to anticipate and pick the moment.

“You can imagine if you have a sudden explosion — you can’t do a big bang after you have seen the explosion — that would be just silly. I have to watch out for a particular cue, maybe someone’s foot on a tram line, and build up from there. I would need to anticipate maybe a quarter or a sixth of a second before it happens.

“With Speedy, I was a bit concerned to begin with as this is usually done with a piano bubbling away and really big urban noises is not something that harps can do but you can do some surprising sound effects and it has worked out really great.”

Elizabeth loves composing and performing to early films which she says have a “raw power”, combining images and music to create the “purest form of cinematic storytelling”. She likes to place herself to the side of the stage so she can see the audience’s reaction to the film and her playing.

She adds: “Speedy is so touching — it deals with the clash between community and neighbourhood diversity and against corporate greed. It has quite a contemporary message while it has some incredible contemporary shots of New York in the 1920s.”

Elizabeth plays a full-size grand concert harp, which was carved in Chicago and gilded with gold leaf in Italy and is about 20 years old.

Among her other projects is research into Victorian fairy harp music. She has produced a CD on the subject, which has had worldwide distribution, been broadcast on radio and television, and been made into a West End stage show with actor Simon Callow for which she also wrote the songs.

This has led to her appearing at the Royal Academy of Art exhibition of Victorian fairy paintings and at Prince Charles’s unveiling of the restored Elfin Oak in Kensington Gardens.

Elizabeth was also involved in the major French exhibition Dragons, Elfes et Fées and also made an appearance in the award-winning Canadian television documentary The Fairy Faith. She lives in a cottage full of books and harps in the Dartmoor village of Chagford where she is the founder of the Chagford Filmmaking Group, a non-profit voluntary organisation dedicated to preserving the nation’s folklore and fairytale heritage through films of British fairytale.

The group has received funding awards from the European Union and the UK Film Council for its work. In 2014, Elizabeth-Jane was selected by the Directors Guild of Great Britain for their talent development scheme.